The Narayanastra (Hindu Mythology) is a powerful weapon of the god, Lord Vishnu, that fires a powerful tirade of millions of deadly arrows simultaneously which increase in intensity when faced with resistance. The only way to defend against the arrows is to show total submission before they hit, causing this weapon to stop and spare the target.

"With your godly power drained into the blade, it will have the strength to destroy all who defy the gods."
― Zeus (God of War series) as Kratos gives his godly power into the Blade of Olympus

" Their strength drained by the evil of the Dark Dragon, the remaining dragons placed their last hope in the hands of the humans in the form of one of their own fangs. Thus was born the Dragon Sword, a formidable weapon inhabited by the very essence of the powers of the dragons."
― Intro, Ninja Gaiden: Dragon Sword

"The goddess has blessed your blade, and the Master Sword has at last achieved its ultimate form! The sword is now imbued with the mythical power to drive back demons, and only Link may wield it!"
― The Legend of Zelda: Skyward Sword

The ability to wield or create powerful godly weapons. Variation of Transcendent Object. Not to be confused with Divine Weaponry.

The user is able to create and/or wield any kind of weapon that possesses incredible god-like power, surpassing that of any and all forms of mundane weaponry, and is able to strike down those who are of a higher existence. The weapon in question can be of any origin be it science, magic, technomagic,spatial, spiritual, cosmic, temporal, divine, demonic, etc.

Some weapons may even able to adapt, changing their form in order to suit the user's needs in battle.

In some cases, an ordinary weapon would be fused with an almighty object or even infused with transcendent power from another source or may be the very weapon itself taking a bodily form.

See Also: Infinity Plus One Sword.

Augus' (Asura's Wrath) greatest weapon is Wailing Dark, a sword powerful enough to battle against Six-Armed Vajra Asura and Deus, unleash energy slashes powerful enough to raise a chunk of the Moon, and literally cut through the Earth itself.

The Ascalon (Ben 10: Ultimate Alien) was a powerful sword created by Azmuth. The sword is able to use the forces of the universe itself as the source of its power.

The Wielders of Twelve Heavens Blade (Chrome Shelled Regios) are the strongest Military Artists in the World, whose monstrous powers couldn't be used with any other weapons aside from their Twelve Heavens Blades, which allows them to use their full power and to a greater extent.

The Sword of Superman (DC Comics) is a sword forged during the Big Bang, making whoever wields it nigh-omnipotent and omniscient...

...as Superman nearly did when it tried to bond with him.

Using his demonic power as a catalyst, Dante (Devil May Cry) fused the broken Rebellion with the Sword of Sparda, creating the more powerful Devil Sword Dante, which grants Dante access to his Sin Devil Trigger form.

... and shape Violent Fierce God Slicer into the even more powerful Sickle of Sorrow that slice open rifts in dimensions.

After he killed Aress, Kratos (God of War series) was bestowed by the goddess Athena the Blades of Athena, chained blades capable of harming even the strongest of deities.

Zeus (God of War series), the God of the Sky, Thunder, and Lightning, King of the Gods, and Ruler of Olympus, wields the Lightning Bolts of Zeus.

Poseidon (God of War series), the God of the Sea wields Poseidon's Trident, the symbol of his rule of the ocean and storms, allows him to create thunderstorms, tidal waves, bolts of electricity, and command the Hippocampi that pull his chariot.

Hades (God of War series), the God of the Underworld that wields the Claws of Hades, chained weapon that embody his power over souls, allowing him to remove the souls of mortals, gods, and Titans, and absorb them to increase his power.

Pit (Kid Icarus series) wields the Palutena Bow, a bow crafted by the goddess Palutena and blessed with the moon's light that project powerful arrows of light.

Kain (Legacy of Kain series) wielding the Soul Reaver, a blade that steals the souls of those it kills. Forged as the prophecised weapon of the Scion of Balance, it is the only weapon capable of harming the Elder God...

...and when in the presence of either Raziel or an alternate past/future version of itself, can trigger temporal distortions powerful enough to alter history, which is usually immutable.

Thanos (Marvel Cinematic Universe) wields the Infinity Gauntlet, which was created to house the power of the six Infinity Stones of Power, Space, Reality, Soul, Time, and Mind. With all the stones, Thanos possesses nigh-omnipotent power, able to manipulate the universe in any manner he sees fit. 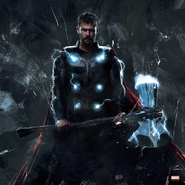 Stormbreaker (Marvel Cinematic Universe) is a divine weapon that can rival and even surpass the completed Infinity Gauntlet in raw power. Forged in a dying neutron star, only a god has the fortitude to wield it.

In the final battle against Thanos, Thor (Marvel Cinematic Universe) wielded both Mjolnir and Stormbreaker, increasing his lightning powers.

Nico Minoru (Marvel Comics) wields the Staff of One, a magical artifact so powerful it made the demon sorcerer Dormammu tremble. The staff is said to give the wielder all the power of the past, present and future and make them unstoppable.

Thor (Marvel Comics) wields Mjolnir, an Asgardian warhammer forged from Uru metal, making it nigh-indestructable. The hammer can manipulate the weather, project devastating blasts of lightning and mystical energy, and harm even the most powerful beings. 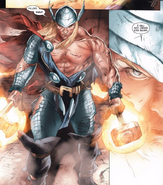 During the invasion of long-term invasion of Earth by the Skrulls, Thor (Marvel Comics) wielded both Mjolnir and Stormbreaker, doubling both his godly might and electrical powers. 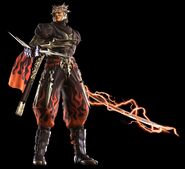 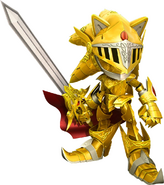 Thanks to his will to never give up, Sonic (Sonic the Hedgehog series) rekindled the long lost light of Excalibur and managed to draw the power of the sacred swords, allowing Sonic to become Excalibur Sonic and Caliburn to become the legendary Excalibur, allowing Sonic to cut through anything and defeat Merlina when she was the Dark Queen. 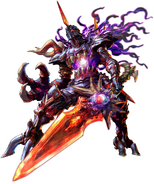 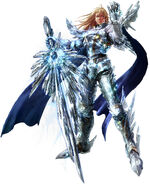 Siegfried Schtauffen (Soul series) is one of the chosen wielders of Soul Calibur, a holy sword forged by Agol from the purified fragments of Soul Edge and infused with his life-force in order to counter the evil demonic sword.

When Iska ( Soulcalibur Legends) wielded both Soul Calibur and Soul Edge, he was able to manipulate both of their incredible and destructive energies and transport himself and others into the Astral Chaos realm.

Xeno Trunks (Super Dragon Ball Heroes) wields the Key Sword, a weapon created by gods to fight and seal demons. Fully charged with the powers of light, darkness, and time by Chronoa, Tokitoki, and Demigra, the sword is able to defeat the fully powered Demon God Mechikabura.

Tenchi-ken (Tenchi Muyo!) is a Master Key that can harness the true power of the planet Jurai, allowing its owner to also call upon the power of the Light Hawk Wings to form a sword.

Tenchi Masaki (Tenchi Muyo!) can generate the Light Hawk Wings, pure energy constructs and source of tremendous power that are the universe's manifestations of energy from a higher plane of existence. With the wings, Tenchi can covert them in armor, shields, and even weapons, but can only generate a set number of wings without destroying the universe.

Given that Mayuka Masaki (Tenchi Muyo: Daughter of Darkness) is the cambion daughter of Tenchi Masaki and Yuzuha, the demonic spirit/counterpart to the Jurian trees of light, she possesses demonic powers of the Tree of Darkness as well the power of the Light Hawk Wings, allowing her to form the wings into a sword.

Link (The Legend of Zelda series) wields the Master Sword. The Master Sword is the Blade of Evil's Bane, infused with the sacred flames of the Golden Goddesses and blessed with Hylia’s power in order to strike down even the greatest of evils.

The Bow of Light and Light Arrows (The Legend of Zelda series) are powerful weapons that are blessed with the power of pure light. Much like the Master Sword, they are able to vanquish any form of evil such as the Demon King Ganon. 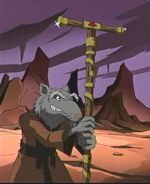 The War Staff (Teenage Mutant Ninja Turtles) is a weapon of vast power, capable of bending space and time, transporting people to other dimensions, and extracting others from alternate timelines, futures and realities.

The Time Scepter (Teenage Mutant Ninja Turtles) is a device that facilitates Time Travel, while also possessing the power to scatter others across alternate timelines and realities and being used as a conduit for Spell Casting.

Ultimate Drako (Teenage Mutant Ninja Turtles) wielding both the Time Scepter and War Staff in unison. With their combined power, he was able to reduce the Battle Nexus to a barren desert and banish Leonardo and Miyamoto Usagi to a dimension where they faced unending hordes of fierce warriors.