Lugh Beowulf (Type-Moon) is a powerful werewolf-like being, capable of high levels of regeneration, shapeshifting and physical attributes far above the norm for a werewolf.

Possess the traits of a transcendent werebeast.

The user with this ability either is or can transform into a Transcendent Therianthrope: a powerful therianthropic being who has literally ascended to true godhood either through powerful magical feats or by divine intervention.

In folklore and mythology, werebeasts are mythological creatures that transform from man-to-beast under the light of a full moon or under their own power. They are often ravenous, feral beasts that can't distinguish between friend or foe. And in others, they are intelligent beings, forming tribes and societies. Their main weaknesses are silver, wolfsbane, etc. However, a transcendent Therianthrope is no longer affected by these weaknesses. They have transcended beyond all other members of their species.

Transcendent Therianthrope are often the progenitors of Therianthropes, and are revered as such. They are often several magnitudes above other werebeasts in terms of physical stats, possessing godly stamina, speed, strength, etc. Also, they might even be truly immortal.

Xion (Bloody Roar) is a godlike werebeast thanks to the power of the Tabula of a Thousand Beasts.

Iceron (Gold Digger) is the creator of all the were-races, as well as the ultimate werebeast, possessing powers beyond all other werebeasts. 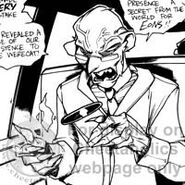 Fenrir (Valkyrie Crusade)
Add a photo to this gallery
Retrieved from "https://powerlisting.fandom.com/wiki/Transcendent_Werebeast_Physiology?oldid=1388827"
Community content is available under CC-BY-SA unless otherwise noted.