Quint Lane (Underworld) has full mastery of his Lycan form, being able to shift at will outside of a full moon and morph one hand independently of his body.

"I know you're angry."
"Oh, no, we're way past that. I could choke the life out of you and never change a shade."
― Scarlet Witch and Bruce Banner (Avengers: Age of Ultron)

"How do you do all that without transforming?"
"I haven't bothered to for years. Not since I discovered my best transformation."
"What power comes with that?"
"Pretty much all of them. You'll figure it out some day."
― Ben Tennyson and Ben 10,000 (Ben 10)

The power to have mastery over any/all forms/modes/transformations. Sub-power of Ability Mastering and Personal Mastery.

User has mastery over any/all forms/modes/transformations/mimicry/physiology, allowing them to use their modes full powers without the restrictions or limitations they have or may have had before.

They can combine, control and even create brand new forms/transformations powers in any state they wish, stay in double-edged/overburst forms for as long as they wish without any negative side-effects/downsides,creating unique form to fit any situation, keep difficult/stressful modes active to the point that its as effortless as breathing, defy/negate mode-lock, etc.

Essentially the user could be in super, legendary, or zenith mode and have no visible/noticeable change in appearance overall, even though they are in fact in that mode nonetheless. 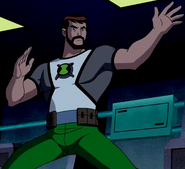 Ben 10,000 (Ben 10: Ultimate Alien) has mastered the Omnitrix and all its transformations to the point he can use them and all their powers without having to personally transform into the alien in question as "Ultimate Ben".

Vegeta (Dragon Ball Z) had mastered the Great Ape form, allowing him to retain his intelligence and speech capabilities, as well as his speed and power to fly.

Sons Goku and Gohan (Dragon Ball Z) have mastered the base Super Saiyan form to the extent that they can remain in it for days with no ill effect, even while sleeping.

Frieza (Dragon Ball Super) was able to completely master his Golden form through intense meditation in Hell, allowing him to maintain it without its previous stamina-draining drawbacks, even when knocked unconscious.
Add a photo to this gallery
Retrieved from "https://powerlisting.fandom.com/wiki/Transformation_Mastery?oldid=1495726"
Community content is available under CC-BY-SA unless otherwise noted.