Omac Prime (DC Comics) is adept at replicating the forms as well as upgrades to a meta powered adversary on the fly.

The user can mimic the transformations of others, gaining the forms, powers or utilities they possess as long as the person mimicked remains in their form. They also gain the advantages of their opponent's form as well. 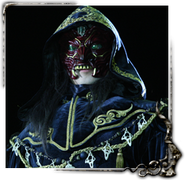 he Man in the Red Mask (Garo) is able to mimic Kouga's Makai Armor transformation.

After remembering part of his forgotten past, Yumeji (Yumekui Merry) was able to evolve his Lucid Gadget power, allowing him to temporarily mimic forms and transformations of dream demons via Vessel Transfer.

The Super Adaptoid (Marvel Comics) could match and exceed any changes or bolstering to an individuals power, adding it to their arsenal and form. 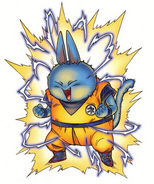 Z (Neko Majin Z) taking on his Super Neko Majin form, his mimicry of Super Saiyan.
Add a photo to this gallery
Retrieved from "https://powerlisting.fandom.com/wiki/Transformation_Mimicry?oldid=1282442"
Community content is available under CC-BY-SA unless otherwise noted.