Darkseid (DC Comcis) possesses the power of the Omega Beams, an all but inescapable and unstoppable energy beam fired from his eyes; capable of moving in multiple directions.

User can change, shift and redirect their energy attacks, alter their effect on a target and phasing through objects or bouncing off of surfaces at any odd angles.

Vilgax (Ben 10) after having conquered ten worlds and the greatest champion of each, vilgax had assimilated the power to project trajectory shifting optic blasts. 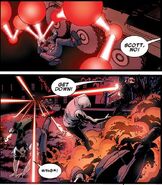 Scott Summers (Marvel Comics) having spent decades dodging and resisting biased prejudice and ascending to the presidency ultimately learned to use his powers in this way.

With power possibly rivaling the All Father Odin himself, Tarene/Thor Girl/The Designate (Marvel Comics) can dispense a bean that arcs and weaves like a streamer. 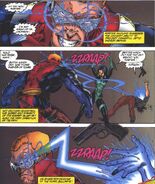 Foster McClane/Flashpoint's (Wildstorm Comics) seedling ability grants him controlled Optic Laser blasts which not only adjust speed and intensity to his will but also bend corners change direction on a dime as well.

Red Eye (Image Comics) a simple construction worker turned lethal crime lord of all South America can fire eradicative eye beams which he can direct, control and adjust accordingly to his whim.
Add a photo to this gallery
Retrieved from "https://powerlisting.fandom.com/wiki/Transitional_Phasing_Beam?oldid=1543105"
Community content is available under CC-BY-SA unless otherwise noted.