The Charmed Ones (Charmed 2018) using the power of three.

The user can utilize the power of trinity. According to legends, the trinity is a concept symbolizing a unity of three different icons intertwined with each other to make a whole. Wielders of this power can join three specific aspects/concepts together to release a great force of power. For instance, if the users use elemental type of aspects such as the sky, land and sea, they can gain control the realms and everything connected to them.

User of magic can channel trinity force using trinity symbol that have been used by many forms and as a result comes in many variations with different capabilities, to cast very extremely powerful spells/curses to a degree that can wrap reality to cast the specific spell/curse. Some users can cannot only use the symbols but can also use the powers of too other specific users and channel each other's others powers and create a greater power for them to use and there fullest together.

According to the texts of New Agers, and Wiccans, the trinity that symbolized of Land, Sky, and Sea, the three fundamental realms of nature. Wielders of this form will be able to command the elements that deal with these three concepts.

Another fact from the texts of New Agers, and Wiccans is that the trinity that symbolizes the Mind, Body, and Spirit, the three fundamental planes of human existence. This means that wielders of this symbol will be able to control the said parts of their existence and possibly remake themselves into Demigods.

The sacred relic of Hyrule, the Triforce (Legend of Zelda series).

The Stillman Sister (Charmed) were temporarily the Charmed Ones after stealing their identities and powers.

The Charmed Ones (Charmed) using the Power of Three 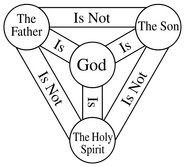 The Triple Goddess (Wicca Mythology) is a trinity goddess of the mother, the maiden and the crow.

The Hindu Trinity (Hinduism) embodies the Cycle of existence.

Worldkillers (Supergirl)
Add a photo to this gallery
Retrieved from "https://powerlisting.fandom.com/wiki/Trinity_Force?oldid=1569674"
Community content is available under CC-BY-SA unless otherwise noted.