The power to detect truths. Not to be confused with Telepathy or Truth Inducement. Opposite to Lie Detection.

The user can sense when they are being told the truth by various means. This ability allows the user to constantly sense when information told to them is credibly given by another and whether a person speaking is telling the truth. The ability to control one's own emotions and body changes do not act as a definite limitation for the user as they can sense whether or not a person is speaking the truth without such details. 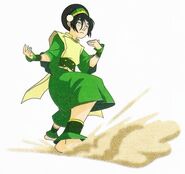 Toph Beifong (Avatar: The Last Airbender)
Add a photo to this gallery
Retrieved from "https://powerlisting.fandom.com/wiki/Truth_Detection?oldid=1571555"
Community content is available under CC-BY-SA unless otherwise noted.