Jesus Christ, God the Son, as well as God the Father and God the Holy Spirit are The Way, The Truth, and The Life.

The user can become the embodiment of Truth, they are able to be led to the right path of knowledge to what is right. They may be able to convert their Truthful works and actions into a sort of energy to become a weapon or an attacking offense and also making it become a support to others as well as defense from any opposing powers of this embodiment. 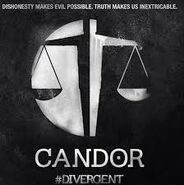 Candor (Divergent) is one of the five factions of Chicago. It was founded by those who blamed dishonesty for the war that wiped out the rest of the world. Candor’s honesty leads to them being inconsiderate and they have a fierce rivalry with the peaceful and caring Amity facfion.

Luea (Jewelpet), the Jewelpet of Truth.
Add a photo to this gallery
Retrieved from "https://powerlisting.fandom.com/wiki/Truth_Embodiment?oldid=1576822"
Community content is available under CC-BY-SA unless otherwise noted.