Wonder Woman (DC Comics) can use the Lasso of Truth to force anyone it captures to obey and tell the truth.

"Have you finally woke up to your senses? You who averted your eyes from the truth...is indeed a more deplorable imitation than anything else ...Best you part from that aspect of yourself! Let us now forge a contract...I am thou, thou art I...The world is filled with both beauty and vice of truths and lies...It is time you teach people which is which!""
― Goemon (Persona 5)

The ability to force a person to tell the truth. Sub-power of Truth Manipulation. Variation of Mental Inducement. Opposite to Lie Inducement.

The user can force/induce others to tell the truth, guaranteeing that the person is telling the truth to the best of their ability.

Alicia (Los Protegidos) can make any person tell the truth. 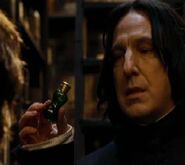 Aquaman (Justice League) speaks the truth while sitting on the Lasso of Truth
Add a photo to this gallery
Retrieved from "https://powerlisting.fandom.com/wiki/Truth_Inducement?oldid=1514883"
Community content is available under CC-BY-SA unless otherwise noted.