The Lasso of Truth (DC Comics) allows Wonder Woman force anyone who touches it to speak nothing but the truth.

"The sword is Gram once held by Sigurd, first hero of Asgard. A sword of ancient magic, bathed in Dragon's Blood, a sword of truth. To suffered the blade is to suffer all the truths you deny yourself. It always hurts. Somtimes it kills. And sometimes it saves your life."
― Loki (Marvel Comics)

The ability to wield or create weapons with truth-based power. Variation of Power Weaponry.

User can to create or wield weaponry with power over truth, which grants the user a wide variety of truth-based abilities. This ability is not only specific to mystic weapons, but also technologically advanced weapons. The power of the weapons depends on what they were created for or what level of truth-based ability they posses. 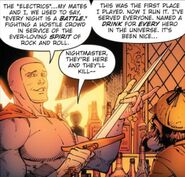 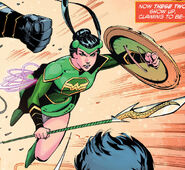 Peng Deilan/Wonder-Woman of China (DC Comics)
Add a photo to this gallery
Retrieved from "https://powerlisting.fandom.com/wiki/Truth_Weaponry?oldid=1130161"
Community content is available under CC-BY-SA unless otherwise noted.