Midna (The Legend of Zelda: Twilight Princess) can manipulate Twilight.

Control the essence which exists between Light and Darkness

The power to generate and manipulate twilight, a mixed essence between light and darkness. Combination of Light and Darkness Manipulation.

In some worlds Twilight is also an access to the Twilight Realm, an alternate dimension of sort which can also be considered a "Shadow World", of which has some mirror-style influence on the "Light World" depending on what happens in the Twilight Realm, as it is a world between light and dark. Any objects or area covered in twilight may also be transformed based on the nature of the said objects.

Zant (The Legend of Zelda) teleporting himself and Link to another arena with twilight magic.

Midna (The Legend of Zelda) forming a twilight portal.

Riku (Kingdom Hearts) is a user of forces from the Light and Dark. 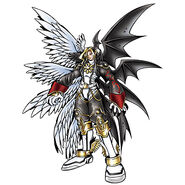 Lucemon Chaos Mode (Digimon Frontier) has the powers of light and dark. 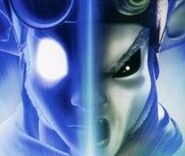 Jak (Jak and Daxter) has power over both Light and Dark Eco. 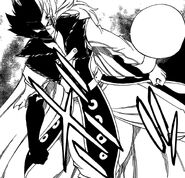 Future Rogue (Fairy Tail), after killing Sting, gained the White Shadow Dragon Mode which allows him to manipulate Darkness and Light.
Add a photo to this gallery