"There are things in this world that you cannot oppose or fight back against, no matter how hard you try."
― Zeref (Fairy Tail)

The power to be unbeatable. Combination of Zenith and Invulnerability. Ultimate variation of Temporary Invincibility.

The user is invincible in many different ways and activities physically and mentally making its user supreme in one or several activities. Some users cannot be defeated by conventional ways and have no known weakness (e.g., Sentry has no physical weaknesses), while others just have never lost a battle and never will.

The Golden Dragon (Captain N: The Game Master) simply cannot be beaten, he has no weaknesses and cannot be harmed by any form of attack. 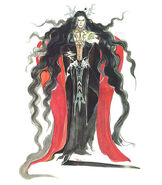 Virgil, The Ring Lord (Saga Frontier) has no weaknesses and cannot be beaten, the most you can possibly do is entertain him with your attacks.

Destroyer (Valkyrie Crusade) is the ultimate divine weapon and an unstoppable force.

God (Christianity) is the true deity in all of existence and can never be defeated by anyone.
Add a photo to this gallery
Retrieved from "https://powerlisting.fandom.com/wiki/Ultimate_Invincibility?oldid=950835"
Community content is available under CC-BY-SA unless otherwise noted.