Akame (Akame Ga Kill!) using the deadly Murasame to inject cursed poison into any victims that have a beating heart, killing them in seconds without fail.

The ability to generate poison capable of killing anything. An advanced version of Poison Generation.

The user can create and utilize poison that is capable of killing anything once it is introduced into the target's system. Neither Poison Immunity nor Regenerative Healing Factor provide defense, nor does an antidote exist, as the chemical composition of the poison can be so complex that no antibodies can be produced against it, or magical in properties that it bypasses any chemical reactions. The poison can even affect inorganic objects, such as stone and wax.

Gin Ichimaru's (Bleach) bankai, Kamishini no Yari generates immensely deadly poison that can disintegrate even powerful Shinigami at a cellular level, even Sōsuke Aizen would have died had it not been for the immortal regeneration powers of the Hogyoku. 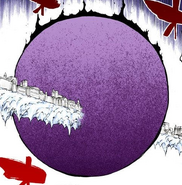 ... Gift Ring which compresses all of The Deathdealing's poisonous power into a small ring...

...which causes an "instant death" of any part of the body it hits.

Magellan (One Piece) using the Kinjite poison, which infects even stone and wax akin to disease, and kills anything upon touching them; seemingly no antidote exists for this destructive poison.

Lord English (Homestuck) Can poison people with his bites, poisoning them on a metaphysical level and causing "Canonical Dissolution"
Add a photo to this gallery
Retrieved from "https://powerlisting.fandom.com/wiki/Ultimate_Poison?oldid=1509148"
Community content is available under CC-BY-SA unless otherwise noted.