The Upper Rank Demons of the Twelve Kizuki (Demon Slayer: Kimetsu no Yaiba) possess regenerative abilities so strong that it makes them practically immortal and invincible.

Heal from any bodily damage on an ultimate level.

"I don't remember much after the explosion, but somewhere amongst the planetary debris the core of my being still existed, one living cell survived, and that is all I needed for my regeneration... Soon that living cell began to multiply into many, it wasn't long before I became conscious of my transformation, I could feel every part of my body growing, crackling with new life and energy. My shapeless mass began to sprout new limbs, first my legs, then my arms, and in no time, my whole body was restored!"
― Cell, Dragon Ball Z

The power to heal from any bodily damage on an ultimate level. Ultimate physical variation of Regenerative Healing Factor.

The user can heal from any bodily damage depending on their respective level.

Because the cells and telomere lengths are constantly regenerating and rejuvenating, users do not age, can recover any damaged body parts, and sustenance requirements are drastically reduced, to the point where the user attains a form of immortality. Even the separation and destruction of the head is pointless, as the user can simply regenerate an entire head or body, repairing any and all brain and nerve cells to perfect working order, keeping the user's mind intact.

Users are effectively immune to drugs, disease, and all harmful foreign substances, and will be forever in their optimal health and physical prime. They are immune, or at least highly resistant, to telepathic attacks, since the regenerative power restores brain cells to its unaltered state, blocking one's mind from any attacks or invasive attempts.

Aside from complete recovery, the ability is also adaptively intelligent, meaning it will not multiply harmful cells such as tumors, but instead repair the sick cells to their original, optimal healthy forms. Also, the user does not require to turn twisted limbs in the right orientation manually for regeneration to occur. Even if something is jammed into the body, it will not prevent regeneration as it can simply shift the obstacle to make the recovery complete. If the user gains the ability after birth, then the ability can also heal any and all birth defects such as heredity illnesses and unformed limbs.

The user's regeneration is so powerful, that their blood may be laced with healing properties as a side effect, allowing them to heal others via transfusions.

Primarily, there are four levels to this power -

See Also: From A Single Cell.

Hyōka Kazakiri (A Certain Magical Index) is an amalgamation of AIM Fields, which allows her to regenerate from any damage, no matter how much of her is destroyed.

Teitoku Kakine (A Certain Magical Index) can regenerate so long as there is any of his "Dark Matter" remaining in existence, as he created a new body out of it after Accelerator tore apart his human body.

Aiwass (A Certain Magical Index) can regenerate it's body fully even if it's seemingly destroyed and it is also impossible to kill due to Aleister's defense mechanism installed into Aiwass system.

Priscilla (Claymore) has vast regenerative abilities, requiring Teresa to reduce her body completely to dust to kill her.

The regeneration of Upper Rank Demons (Demon Slayer: Kimetsu no Yaiba) grants them immortality, makes them immune to diseases and allows them to instantly heal any injury with the exception of the Sunlight.

Majin Buu (Dragon Ball Z) is capable of regenerating so long as even one molecule of his body remains, requiring Goku to atomize his entire body to kill him.

Cell (Dragon Ball Z) can regenerate his entire body so long as at least one cell is intact, requiring Gohan to completely atomize his body to destroy him.

Baby (Dragon Ball GT) can regenerate so long as he has at least one cell remaining, requiring Goku to send him into the sun to completely incinerate him.

Born from the Altana of the Earth, Utsuro (Gintama) possess an infinite source of life energy which granted him unbelievable amount of regeneration abilities...

...as he is capable of recreating an entirely new body from his severed right arm alone, using his previous body as a decoy to kill Umibozu during their duel.

The Guyver's Control Medal (Guyver) stores the genetic structure and memories of its host, so that if the host is injured or killed, it regenerates that host from even the smallest bits of genetic material.

Aptom (Guyver) can regenerate even from scraps of flesh.

Alucard (Hellsing) possesses vast regenerative powers, able to heal from a pool of blood and being blown to shreds by gunfire.

Zabuza Momoch (Naruto) was resurrected via the Summoning Technique: Impure World Reincarnation, and could regenerate infinitely and completely even when blown to dust and ashes.

Madara Uchiha (Naruto) was resurrected via the Summoning: Impure World Reincarnation, and could regenerate infinitely and completely even when blown to dust and ashes until he revived himself into a living person.

Alucard (Rosario + Vampire) regenerating at immortal levels due to his tremendous life-force, that only by destroying his body parts completely and instantly can he prevent those parts from recovering.

Naming himself Undead after drinking the Fountain of Youth, Ban (Seven Deadly Sins) now never ages internally but can age externally (i.e. he can grow facial hair) and can be decapitated, vaporized and dismembered and he simply reforms himself.

...that their master called it the closest thing to being immortal as they can completely rebuild themselves after getting torn to shreds, blown apart up by powerful magical attacks, and getting hit by physical attacks with the strength to level a city block. 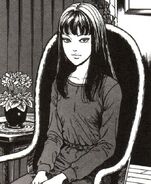 Tomie Kawakami (Tomie) possesses vast regenerative powers, able to completely regrow her body from even the smallest cells of her body, such as blood.

Elder Toguro (Yu Yu Hakusho) possesses so many regenerative powers that even when his brother blew his body to scraps of flesh, he managed to recreate his entire body from those pieces.
Add a photo to this gallery

Ectonurites (Ben 10 Series) like Zs'Skayr can regenerate from the smallest piece of their DNA and can even stay sentient on a molecular level.

Swampfire's (Ben 10: Alien Force) regenerative abilities allow him to restore himself after being reduced to mulch.

Due to the nature of his Elasticity abilities, Patrick Eel O'Brien/Plastic Man (DC Comics) can be blown to smithereens and reform as along as his atomic structure stays intact, making him essentially immortal.

Lobo (DC Comics) is banned from death, and can regenerate from even being reduced to a puddle of blood, which grants him complete immortality.

Wade Wilson/Deadpool (Marvel Comics) possesses a superhuman healing factor derived from that of the mutant Wolverine given to him during the Weapon X Program in Department K, that allows him to regenerate damaged or destroyed areas of his cellular structure,...

...allowing regrowth of severed limbs, vital organs and even regenerating from being reduced to a puddle.

The Carnage Symbiote (Marvel Comics) is able to regenerate from just a few cells, such as that of the blood of its first host, Cletus Kasady.

Tech E. Coyote (Loonatics Unleashed) possesses vast regenerative powers, able to heal even when reduced to ashes.
Add a photo to this gallery

Groot (Marvel Cinematic Universe) can regenerate his full body from something as insignificant as a sprig.
Add a photo to this gallery 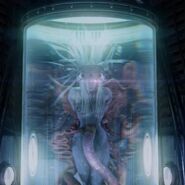 Jenova (Final Fantasy VII) can regenerate indefinitely so long as some of her cells still exist, her consciousness living on in her very genetic structure.

As a fixed point in time, Geras (Mortal Kombat 11) possesses vast regenerative powers, able to reconstruct his body even after being blown to pieces by a grenade.

Dark Samus (Metroid Prime) can regenerate from anything short of total atomic disruption; Samus had to destroy every bit of Phazon in the universe to finish her for good.
Add a photo to this gallery
Retrieved from "https://powerlisting.fandom.com/wiki/Ultimate_Regeneration?oldid=1660797"
Community content is available under CC-BY-SA unless otherwise noted.