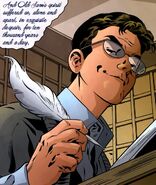 Dyntos (Kid Icarus Uprising) possesses powers beyond all hope of measure, as he is greater than all the other gods and the chaos-kin combined, as he capable of doing anything he chooses, but it is unknown if he is omniscient.
Add a photo to this gallery