The Dawnbreaker (DC Comics) summons creatures of his own internal darkness via Blackout attack.

User is able to create beings of darkness/shadow or shape existing darkness/shadow into wanted shapes and purposes. They can grant the beings varying levels of independence (controlled, automatons/programmed, semi-independent) and existence (momentary to permanent) and delete the creature once they are done with them.

Darklings (The Darkness) are beings created by Jackie Estacado, wielder of the Darkness.

Iskatu (Diablo) can summon hordes of Shadow Vermin to attack and overwhelm his enemies.

The Oni Generals (Jackie Chan Adventures) use this ability to summon ...

... Shadowkhan, ninjas made of shadow with different shapes and abilities depending on the tribe.

Wearing/controlling an Oni Mask (Jackie Chan Adventures) will give the user the ability to summon Shadowkhan.

Fang (Boboiboy) and his Shadow Dragon. 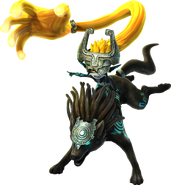 Midna (Hyrule Warriors) using the dark magic of the Twili to create wolves.

...Tank...
Add a photo to this gallery
Retrieved from "https://powerlisting.fandom.com/wiki/Umbrakinetic_Creature_Creation?oldid=1517758"
Community content is available under CC-BY-SA unless otherwise noted.