Thanks to an experimental procedure, Luke Cage (Marvel Cinematic Universe) was granted unbreakable skin and super strength, making him indestructible to almost anything.

The power to have indestructible skin. Sub-power of Skin Manipulation. Advanced Version of Thick Skin.

The user possesses unusually resilient skin that is impervious to any harm or damage.

Baron Samedi (Heroes) is an evolved human with impenetrable skin...

...to the extent that being slammed into a car at high-speed barely even fazed him.

Thanks to an experimental procedure, Luke Cage (Marvel) was granted unbreakable skin and super strength, making him indestructible to almost anything. 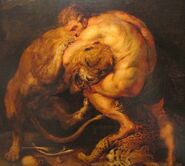 Nemean Lion (Greco-Roman Mythology) was a monstrous lion with an unbreakable pelt immune to arrows. Because of this, Heracles used the pelt after killing it as armor. 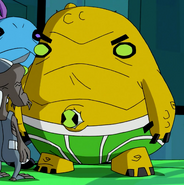 The Worst's (Ben 10 Omniverse) skin is impenetrable, making him completely indestructible. He can however still feel pain.

Described as an "iron balloon", Charlotte Linlin/Big Mom (One Piece) can destroy cities, sink ships with her bare hands and resist cannon and gunfire without receiving a single injury...

...even at 5 years old, she could easily break a giant's sword with just her hand.

Yuujiro Hanma (Baki series) is durable to the point that things like bullets, lightning strikes, blades, cannot even penetrate his skin or injure him at all.
Add a photo to this gallery
Retrieved from "https://powerlisting.fandom.com/wiki/Unbreakable_Skin?oldid=1760551"
Community content is available under CC-BY-SA unless otherwise noted.