The Alien Necromorphs (Dead Space) are the deceased remains of the alien inhabitants of Tau Volantis that have been reanimated as Necromorphs.

User with this ability either is or can transform into a combination of an alien and the undead and possess abilities associated with both. 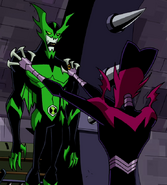 Vladats (Ben 10: Omniverse) are a race of alien vampires. 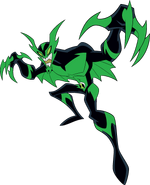 The Ectonurites (Ben 10 series) are a race of ghost-alien hybrids that inhabit Anur Transyl...

...alongside Zs'Skayr, who is the very paragon of his race.

The Vampiric Queen (Aliens/Vampirella) was born from the body of the vampiric alien Vampirella, granting it vampiric attributes such as wings.
Add a photo to this gallery
Retrieved from "https://powerlisting.fandom.com/wiki/Undead-Alien_Physiology?oldid=1518433"
Community content is available under CC-BY-SA unless otherwise noted.