Dul'Mephistos, more commonly known as Mephisto, Lord of Hatred (Diablo), is the master of the undead of the Burning Hells.

The user either is or can transform into an Undead Lord, the most powerful form of undead imaginable. Unlike most undead, the undead lord may possess unimaginable skill in fearsome dark magic, and may command legions of the undead.

Also, undead lords are known to have increased resistance to magic aimed at returning the undead to rest, and have the fewest weaknesses. Furthermore, depending on the user, they may have a demonic nature, thus granting them access to the most unholy of powers.

Zobek (Castlevania: Lords of Shadow) is the Dark Lord of Necromancers.

The Lord of Bones (Darksiders 2), also known as the "Dead King," serves as a psychopomp who rules over the realm of the dead, sifting through the lost souls of countless species along with his Dead Lords.

Lich (Valkyrie Crusade) has power beyond life and death and both in the palm of her hand, and is the one that unified the immortals. 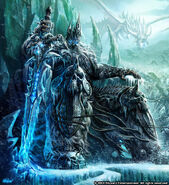 The Lich King (Warcraft), master and lord of the undead Scourge.
Add a photo to this gallery
Retrieved from "https://powerlisting.fandom.com/wiki/Undead_Lord_Physiology?oldid=1379473"
Community content is available under CC-BY-SA unless otherwise noted.