The Lord of Bones (Darksiders) rules over the undead.

"Only moving because of my necromancy, they have all already died. Ahahahaha!"
― Eri Nakamura (Arifureta Sekai Saikyou)

The power to manipulate undead. Sub-power of Necromancy. Variation of Mythic Manipulation.

User can create, manipulate, and destroy physical and ghostly undead, command the dead souls, condemn them to torment, or steal the souls of the dead/dying to increase the legions of the undead.

Magnus Hainsley (Angel) demonstrates his power over the dead and undead by immobilizing Angel.

Through Necromancy, Eri Nakamura (Arifureta Sekai Saikyou) can freely reanimate and manipulate the dead, being capable of controlling up to several hundreds of undead as her puppet.

Phantom (Marchen Awakens Romance) can control the Guardian ÄRM, V (Fünf) - Dead Dragon which as implied takes the form of an undead dragon. 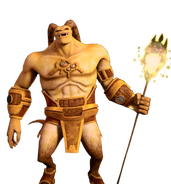 Sania (Valkyrie Crusade) the goddess of the dead.
Add a photo to this gallery
Retrieved from "https://powerlisting.fandom.com/wiki/Undead_Manipulation?oldid=1545956"
Community content is available under CC-BY-SA unless otherwise noted.