Because his father took him out of the Land of the Dead also called Limbo, Sinbad (Sinbad) can exist in both the world of the living and the dead.

Be simultaneously alive and undead.

The ability to be both alive and undead in equilibrium. Sub-power of Paradox Manipulation.

User exists in a paradox state of being simultaneously alive and undead by all definitions of both states. They may appear to be alive for all intents and purposes, to any test or scan, but possess undead/necrotic energy sustaining and empowering them, their living and undead states may exist on a scale depending on how healthy they are. 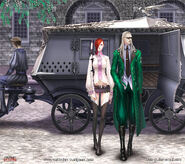 After finding the Book of the Dead, Clover (Anima: Beyond Fantasy) was converted into a being neither alive or dead.

Due to being born from death, Ouri Kagami (Corpse Princess) is considered to be both human and shikabane.

Crows (The Crow) are deceased beings empowered by a spirit of vengeance who tie them between both the land of the living and the realm of the dead.

Kirika Ueno (CubexCursedxCurious) is both alive and undead because of the cursed tool Ginstrnag's Love.

After his death, Goku (Dragon Ball) was permitted to keep his physical body in the Other World.

John Milton (Drive Angry) being an escaped soul from hell is neither living nor extinguished. Ergo no matter what is done to him you can never kill a dead man.

Due to being still considered immortal despite being killed by Zeref's ankhseram's contradiction curse, Mavis (Fairy Tail) is both alive and dead at the same time.

After nearly dying in a bus accident, Hiyori Iki (Noragami) became a half-Phantom, stuck between the human realm and the afterlife.
Add a photo to this gallery
Retrieved from "https://powerlisting.fandom.com/wiki/Undead_Pulse?oldid=1457977"
Community content is available under CC-BY-SA unless otherwise noted.