Use the traits of a unicorn.

The power to use the abilities of a unicorn. Variation of Mythical Bestiary and Horse Physiology.

User with this ability either is or can transform into a Unicorn, which is usually described as a white horse-like animal with a large, pointed, spiraling horn projecting from its forehead, and sometimes a goat's beard and cloven hooves, a horse's head, a deer's body, and a lion's tail. They are extremely wild woodland creatures, symbols of purity and grace, which could only be captured by a virgin. In the encyclopedias, its horn was said to have the power to render poisoned water potable and to heal sicknesses.

Note that none of these descriptions mention anything about gentleness or goodness; unicorns were always considered wild and dangerous.

Twilight Sparkle (My Little Pony Series), a highly exceptional in regard to magic, having dedicated herself to the art. 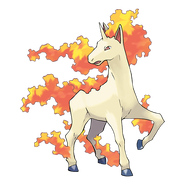 Queen Unicorn (Barbie and The Secret Door), one of and queen of the unicorns. 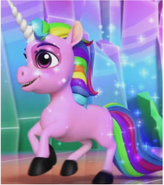 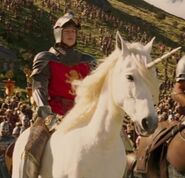 Peter's unicorn (The Chronicles of Narnia)

Stellacorn (League of Legends) is a celestial species. They looks like glowing horses with two wings on their back, and one horn on their forehead.

Shockhorn (Power Rangers Dino Fury)
Add a photo to this gallery
Retrieved from "https://powerlisting.fandom.com/wiki/Unicorn_Physiology?oldid=1711102"
Community content is available under CC-BY-SA unless otherwise noted.