Zombie (Valkyrie Crusade) can still move normally, even though her brain does not function well and her bones are coming out from her legs.

"Oh! Oh, my God, Joe, when did you start running? And jumping? And sky-dancing?"
― Quagmire after hallucinating that Joe is able to move (Family Guy)

"My arm is apparently bent in a way that its not supposed to be! Will call this one a draw."
― Kankuro Nishiyama (Ramen Fighter Miki)

The power to move/act normally despite movement impairing disabilities. Variation of Superior Activity. Not to be confused with Unrestricted Movement. 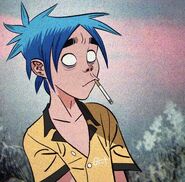 Stuart "Stu-Pot" Pot/2-D (Gorillaz) can still move and act normally despite the 8-ball fracture of his eyes,...

...the disorder not hindering his daily life in the slightest.

Tom (Eddsworld)
Add a photo to this gallery
Retrieved from "https://powerlisting.fandom.com/wiki/Unimpaired_Activity?oldid=1524203"
Community content is available under CC-BY-SA unless otherwise noted.