" For the first time in my life a chill ran down my spine... that man had seven hearts and five brains. This was the moment I perfected my sword technique. "
― Yoriichi Tsugikuni in regards to Muzan Kibutsuji (Demon Slayer: Kimetsu no Yaiba)

The power to possess a unique or abnormal physiological makeup. Sub-power of Uniqueness. Variation of Superpowered Physiology.

The user possesses a unique physiology, which makes them special compare to ones species. This gives them physical and mental characteristics which makes them superior in some way to the rest of there race. The user helds abilities that by their race may be natural are therefore "superhuman". Despite members appearing completely identical, their bodies are powerful and possess a varied abilities or function in unequivocally inhuman ways.

Half-ghosts (Danny Phantom) have a unique physiology that allows them to be either ghost or human and also have more potential powers than a regular ghost.

Saya (BlazBlue) is an artificial human whose unique physiology allows her to infinitely amplify seithr.

Jin Kazama (Tekken) was born to three different families, inheriting the Mishima's electric ability and superhuman power, the Hachijo's Devil Gene, and the Kazama's purification power, making him a unique hybrid being of the three families.

Ichigo Kurosaki (Bleach) is a unique being born between a Shinigami and a Quincy who was infected by a Hollow, which he also inherited, being able to act as the next Soul King upon his death, which Ichibei planned on.

Rin and Yukio Okumura (Blue Exorcist) are unique existences born between a Human and the Demon God, Satan, both of them earning special traits differing from other humans and demons alike…

…Rin inherited his demonic powers and heightened physical abilities, including his special Blue Flames able to use them in Assiah without limits. Soon becoming able to accept his demon heart and perfect flames, becoming a perfect vessel for his father…

…Yukio, despite not inheriting demonic powers has special eyes that links to Gehenna, being a window for Satan to interact with. He also has a unique resistance to all flames that even the Blue Flames doesn't burn or affect him at all, making him yet another perfect vessel for his father.

Having received her Beast Factor through artificial means, Michiru Kagemori (BNA: Brand new Animal) is a unique Beastman, displaying the ability to take on the form of different species and also many unusual abilities not associated with any known species.

As a descendant of the Three-Eyed Clan, Tien Shinhan (Dragon Ball series) possesses a unique physical composition as a throwback to his ancestors, allowing him to use techniques that are impossible for a normal human.

Grand Zeno (Dragon Ball Super) is the supreme ruler of the multiverse, and possesses incomprehensible power beyond that of any and all gods and angels.

Majin Buu (Dragon Ball series) is a unique magical entity that has existed since the dawn of time, and who'se physiology defies all known laws of the universe.

Marshall D. Teach/Blackbeard (One Piece) possesses uniquely atypical physiology, making him the only known being who can wield two Devil Fruits at once.

Shin Uchiha (Naruto) has a unique physiology that makes him compatible with all foreign genetic material.

Tristan (Seven Deadly Sins) was born between a demon father and a human mother who was also a reincarnated goddess, possibly giving him traits of all three species.

Ren Fuji (Shinza Bansho series) is a unique being created by mixing the blood of a hadou god with part of a human's soul, making him a living holy relic.

Illyasveil von Einzbern (TYPE-MOON) is a unique life born between a human and a homunculus.

Jack Hawksmoor (Wildstorm/DC Comics) has undergone such extensive surgical modifications at the hands of 70th-century humans that almost nothing inside him can be considered human anymore. 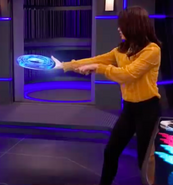 Bree Davenport (Lab Rats: Elite Force) is the worlds first Bionic-Superhero Hybrid who was first bionic, but gained her own superpowers through outside means.