Astaroth (Valkyrie Crusade) is completely unlovable, as her mere presence causes all love to fade away.

Make others or themselves unloved.

"I don't think people are meant to be by themselves. That's why if you actually find someone you care about, it's important to let go of the little things, even if you can't let go all the way. Because nothing sucks more than feeling all alone, no matter how many people are around."
― JD (Scrubs)

"No, Selma. Even a robot built to love you cannot love you."
― Selma's Lovebot (The Simpsons)

The ability to make others or themselves unwanted by anyone. Sub-power of Love Manipulation.

User can make others or themselves supernaturally unwanted by anyone.

Pretensia (The New Addams Family) is a self-promoting, inconsiderate freeloader who bores everyone to death with her ceaseless namedropping and mindless gossip, causing even her families to hate her. 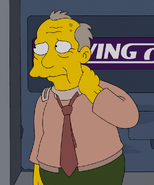 Gil Gunderson (The Simpsons) is both perpetually unlucky and unlovable by anyone/everyone, as nobody can stand be with him or be around him for any length of time.

Due to her powers of inducing hatred towards her, SCP-053 - Young Girl (SCP Foundation) remains as one of the most unloved SCPs in the facility.
Add a photo to this gallery
Retrieved from "https://powerlisting.fandom.com/wiki/Unlovability%C2%AD_Inducement?oldid=1450576"
Community content is available under CC-BY-SA unless otherwise noted.