Franky (One Piece) upgraded his mechanical body to survive in the New World.

The ability to upgrade mechanical/cybernetic body or armor to become better than before. Variation of Evolution.

Ones previous abilities are usually enhanced to a certain degree.

Possibly increase of any of following:

If upgrade is for sea:

If upgrade is for air/space:

After regaining his humanity and joining the Outworld Investigation Agency (OIA), they gave Cryax (Mortal Kombat) upgrades to his body for tolerance to lava and teleportation

...gaining, among other abilities, the power to shapeshift.

After being defeated by E-102 Gamma, E-101 Beta (Sonic the Hedgehog) was upgraded for aerial combat and with a better arsenal. 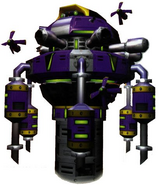 Metal Sonic (Sonic the Hedgehog) upgraded himself into Neo Metal Sonic for the purpose of defeating Sonic... 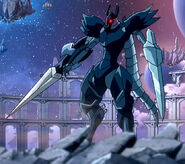 Gamer (Miraculous Ladybug) is able to upgrade his mechanized robot form by absorbing people as units...

...increasing its size, strength and gaining a humanoid shape. 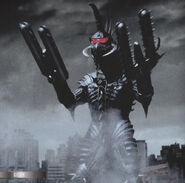 After a defeat at Godzilla's hands, Gigan (Godzilla) was upgraded, becoming Modified Gigan.

Chachamaru Karakuri's (Negima!) latest upgrade allows her to form blades and firearms from her body.

Robocop (Robocop vs. the Terminator) has been upgraded to combat Terminators.

Killabyte (ReBoot) received a viral upgrade from the User that programmed him... 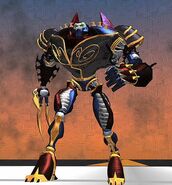 After her destruction during the Vytal Festival, Penny Polendina (RWBY) was rebuilt in an upgraded body.

Nicolai Technus (Danny Phantom) in his upgraded form, Technus 2.0.
Add a photo to this gallery
Retrieved from "https://powerlisting.fandom.com/wiki/Upgraded_Form?oldid=1406408"
Community content is available under CC-BY-SA unless otherwise noted.