The ability to grant superior abilities in exchange for allegiance. Sub-power of Entity Lordship. Combination of Remaking and Contract Bestowal.

Users can greatly enhance existing entities, significantly upgrading their abilities, granting additional ones, lifting their limitations and removing their flaws. In exchange, a master-servant bond is established with the user, ensuring their obedience and loyalty.

As the almighty, Yhwach (Bleach) can give any person he wants power, if that person is drinking his blood and becomes loyal to him.

After allowing himself to fall under Babidi's mind control, Vegeta (Dragon Ball Z) received a massive boost in power. 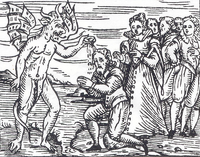 It was believed that Satan (Folklore) could grant witches the power to work black magic in exchange for serving him and doing evil deeds in his name.

Gabriel Agreste/Hawk Moth (Miraculous: Tales of Ladybug & Cat Noir) can give ordinary people superpowers with his Miraculous on the condition they serve him.

All For One (My Hero Academia) can not only take powers from others, but can bestow them as well, as long as those individuals he empowered swear their allegiance to him.

Breed (One Piece) can use the mind control power of the Peto Peto no Mi to bring out the full potential of his victims.
Add a photo to this gallery
Retrieved from "https://powerlisting.fandom.com/wiki/Upgrading_Subordination?oldid=1701651"
Community content is available under CC-BY-SA unless otherwise noted.