Traci 13 (DC Comics) specialty is "urban magic," which allows her to tap into the magic of cities.

The ability to use urban-based magic. Form of Magic. Variation of Environmental Magic and Urban Manipulation. Opposite to Nature Magic and Rural Magic.

The user can use magic to cast spells that draw upon the magic of urban areas, (including cities, towns, suburbs, etc.), tapping into their knowledge and power to cast spells, teleport, fire blasts of magic energy, create mystic force shields etc., and/or mystically manipulate their aspects. 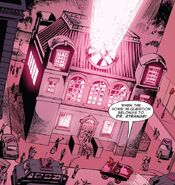 Academy City (Magi - The Labyrinth of Magic)
Add a photo to this gallery
Retrieved from "https://powerlisting.fandom.com/wiki/Urban_Magic?oldid=1239401"
Community content is available under CC-BY-SA unless otherwise noted.