Motto:I can kill anyone or anything even if it's God himself.

"I've gone killed Abstract Concepts,Worlds,and even entire Pantheon of Gods. Do you really believe in your chances?"

"Please think,before you do something easily stupid."

"Is it wrong to make people you care for happy? No of course it's not."

"Theres no wrong in pursuing joy,it's just that it's not pleasure"

A person of complexity, Aria was a one of a abnormal childhood. She was born under a family of combatants,yet they all lived a normal day to day lives,to one would think that they have retired,while in truth it was in the ideaology of Theodore Roosevelt, "Speak softly,and carry a big stick." Aria had a normal life,with good amount of friends,passing her classes, and being behaved. It was not good for her though, always feeling half-hearted about most of things as a child and feeling like something was missing. So in the end, she turned to her life of combat, to which her parents reluctantly agreed and hesitantly trained her.

Aria thus began her life of warfare,with intense training and skill honed from her family's teachings and trials,her career in the dark side of things was a major success. Rising from the low ranks absurdly quickly,Aria made herself infamous,gaining the title "Mistress Reaper." and all was going well until a major failure cost her. Hospitalized from multiple bullet wounds and blade wounds,Aria was at near death,and there was where she found her supernatural abilities. Epafi,the ability to interact with all.

With this new power,Aria was able to come in contact and easily erase anything even abstract concepts if not approached correctly. This gave her new windows that she previously did not have,allowing her to insta-kill many without efftort,and coupled with her skills,she was a unbeatable foe. Though it wasn't until she met a special boy that her life turned even further out of fray.Shisei Yugami.

It was during a mission on a area near Aliter City,her home, that she met him,running and pleading for help or anything that remotes as such with so much injuries on his person. Not knowing what to do,she brought him back to her family's residence and soon he was adopted. There she personally trained him in her family's arts. While things were fine at first,they slowly grew distant,with her inexpireience to interact with a little brother figure and a pique of jealousy from the bottom of her stomach for taking her family's attention away from her and by extension,her sense of purpose,it was seemingly inevitable.

Days turned to years,and after a while,Shisei found his own place in the city,while Aria herself was employed to Omni-Branch Advancement Intelligence. It wasn't long till they met each other again, during a time with the fate of the world at stake,though their relationship this time was completely formal with snarky distaste from her side. It was when they returned back at a inn after killing Shisei's biological sister,that things really started to change with their relationship.

Crying with tears running down his eyes,Shisei ranted with vicious self-deprication.With how he should have known he had a real sister, with how he should've helped her,with how he should have been more open and kind to others,and with how he was a selfish person and brother. It was this time things became automatic,she comforted him,soothed him with his past noble actions,whispering how she was proud of him as a elder sister.She continued this till he slept peacefully,and her realizing how much she really did love him.

After that event,their relationship were more improved and conjoined like real family. That of which only continued improving with the continuation of their journey. After all was said and done,they kept contact with each other and catching up on things as well. Aria's current priority as of now,is to finally build the bridges between her and her "brother" Shisei Yugami.

Despite her complex background,Aria's personality is one of being straightfoward. She is usually blunt and honest about things,unless it's benificial for her objective to otherwise be closed and lying. Not to mention completely formal and polite to most,if not,all those she meets,quiet fitting the Lady of War Archtype. She can on the other hand,be quiet socially awkward a handful of times,no doubt from her extensive stay in the assassin/combat buisness,to that this awkwardness have become quite a endearing trait.

She is quite passionate about her job and occupation,completely motivated to get the job done quick and efficient,all of this surpassed by nothing other than her value of her family. While she is cold and pragmatic on the job,outside it,she is a loving sister figure to all youths willing to interact and this is especially evident to her adoptive brother,to whom she still looks out for sharply.

She is a bit self-councious about things,like her *ahem* lack of assets among others and there has been a event where she was actingly like some schoolgirl with a trivial problem,no doubt pointing she has a childish side as well,despite her usual Mature Adult persona. All in all she is someone easy to get along with,in spite of her mature,formal exterior.

Aria's day to day tune is to be calm,collected,and be formal beyond formal,almost always acting seemingly indifferent and straight-faced to good majority of events that happen around her. Intially distant and unemotional to many,it would be considered impossible to get close to her by many. Yet she does have a soft side,to those she trust and those called family and friends by her. These times,she acts like a normal mature girl. Acting and speaking gently,and in general kind.If there was one trope to define her,it would be Sugar and Ice Personality

Efficiency over all,That's her way of life. Aria is all about the best method in any term,always finding the pragmatic way,even if it can be considered low. Willing to even use her abilities to her fullest if it means ensurement of things going her way and all. Not a person to care for fun or style in the way of her life,in terms of formality anyways.

If given the time,she is actually carefree about most things she goes by. Spending god knows how much per a day,yet still able to support herself with the expenses from one day,be it from online or a in person shopping spree. She also takes odd jobs,like delivery,mail, and other such that wouldn't fit her previous description. A odd girl that one.

Aria is someone of many skills in combat. She is well trained in all forms of combat be it,knife fights,swordplay,firearms,and several hand to hand skills,no doubt from the training of her parents and the time and expirience out on the field. Also as said above,she is fully efficient with no style,being pragmatic and always looking for a weakness or advantage and constantly active with her ability for an easy killing of her target.

She is also a master stratigist and tactician,talents she learned overtime with exposure to large groups. To such a point,that she is able to get a flawless victory in a battle if the right pieces are in her hands and in the perfect situation. Mixed with her ability and combat ability,it makes for a deadly foe at the very least.

A branch in company in Aliter City Aria is employed to. Founded in 2001,by CEO Donnovan Trask, their main objective are to advance in the world in biological and technological knowledge and tools. They are also one of the main houses in Aliter City's advancement and economy,being one of the few directors making the decisions. They are not above human expirimentation,unofficial tests,and illegal trades,as long as results bear fruit.

Artificial Constructs created and equipped with the most advanced of OBAI's technology. Developed to be the most perfect weapon against any foe and situation,these are nigh-unbeatable. Attached with a IAO (Interact,Adapt,Overcome) System,it makes these machines of war able to continously assess,learn,and counteract all obstructions of their objective. They are heavily programmed with the least being 6000054723110 types of code,making any type of hacking or possession nigh-impossible,coupled with extradimensional self-sufficiency to keep them nearly endless in age. On their sentience however,is debated.

They also have the ability to shapeshift to other varients or even other forms as well,like a animal's phisology (though unable to shift into a biological type.),with each little bit of their compisition being a nanite that is able to shift into different types of matter at a situations call,forming weapons,tools,etc. If ever low on resources,the surrounding enviroment can be converted into more nanamachines to use for replenishing of any lost. Deadly and Relentless,these are the most horrifying foes from the OBAI.

Noted, that the main method of adaptation, from the OA (Observe,Alter,and Counter) network a sentient database,or in rare occasions,a link of multiple units, that takes data and information from a individual Ergelio,and gives others a countermeasure ASAP,take that away and they are limited in adaptibility if not completely unable. 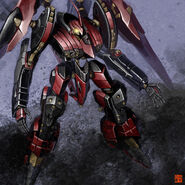 Superior Varient
Add a photo to this gallery

The one to have handpicked Aria into employment due to the latters extraordinary track record,their relationship is completely formal and polite in policy,but of course him pulling a couple strings for Aria's job easy and such. Nothing is with these two beyond Employer and Employee.

Aria's adoptive younger brother,these two initially were nothing but honarary to each other,over time that became into one-sided distaste,and soon they were distant for a while. After reuniting,they were able to slowly build back a good relationship and make up for the past. For Shisei anyway,Aria is still fixing bridges.

Aria's first and most persistent enemy as a career in OBAI,first it was just a chance meeting on oppisite sides. But,after a fight involving a building collapsing on him,it became common for them to fight each other,mainly due to Verion continously chasing Aria for a good fight and a good death to the point of obsession.

Retrieved from "https://powerlisting.fandom.com/wiki/User_blog:A_Living_Person/3rd_Character_Sheet?oldid=1383840"
Community content is available under CC-BY-SA unless otherwise noted.