Lei-Nad of the Lions Den

Secretary (Tax Collector To the Makers)

The Fourth Helper to find a Gift to Secretaries and become an immortal tax collector Lei-Nad is the second most powerful Secretary. His power is due to the fact that he may use gifts from any maker. Lei is in service not to Nature, from whom his gift was collected, but her son Morn.

Lei became a Secretary because of the Golden Gloves which he accidentally found in The Cave of Lions by distracting the three Guardians. Upon exiting the cave he was led into Morns Armory and exchanged the Golden Gloves for the Makers Gloves and the Mask of Infinite Choice. In order to collect his tax he was given the Staff of Hunger by the lady Nature, but later collected the Staff of Starvation and uses both. Later in time he convinced other makers to give him powerful gifts and also uses Full Set, Lungs of Whales, Waistband of Time, Heart of Soldiers, and the Boots of the Bounding as well as some other less powerful weapons.

During all his tax collecting and Gift gathering Lei gained a powerful relationship with Eave the sister of Morn and the very powerful daughter of Time. As a favor to Eave Lei-Nad trained the most powerful Secretary, Saj, And they remain friends. Magle was born into the same tribe as Lei and they often squabble as would brother and sister. Mirg and Lei continue a friendly rivalry and often battle to stifle Zeus's desire for a war. Lei has a fatherly feeling for Euan as they both collect the hunger tax. 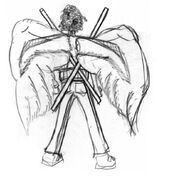 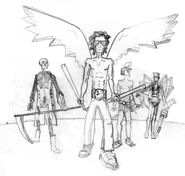 Add a photo to this gallery

To read more go check out my wiki: w:c:Makers

Retrieved from "https://powerlisting.fandom.com/wiki/User_blog:Caydeb/Character_Sheet/_Lei-Nad?oldid=1423696"
Community content is available under CC-BY-SA unless otherwise noted.