Motto:I set the limit, nobody else

Backstory:When Crash was created by his master he didnt know anything about this new world, nor who his master truly was, his master spoke a weird language unfamiliar to Crash. Master quickly understood that Crash didnt understand him, so Master moved his fingers through the air and then Crash suddenly collapsed, when Crash woke up he knew everything within Science, Math, Languages, Geography, Religion, History, Technology, Coding and Programming. He spoke Masters language fluently he called it "English", Crash first of all wondered what his name is, since he had recently learned of the concept of "Names", Master said he liked a book called "The Flash" so Crash´s name then became "Flash Crashley". Crash later learned that his existence was merely a expirement to test the capabilities of COTU, then Crash asked Master if Crash could have some sort of special power like master posses, Master agreed that it would be wise that he gave him a power, he found one in his gallery known as "Complete Arsenal".

After about a year of fitting into society Crash had finally aquired a job, he became a crime investogator and since his powers allowed him to access any power at all, this allowed him to access a few power that he categorized as talents and they are used daily for Crash´s job. After awhile Crash noticed that Tap(formerly known as Master) was still experimenting with the COTU, and sometimes things would go wrong and when that happened Crash would be there to help or even eliminate the product of the expirement. But during the years even that stopped happening and in that end everything dies even Tap.... Tap is lost... Friends are lost... what good is really time? the only thing it brings in death,destruction and sadness.

After spending around 100 years on Earth Crash decided to head for the stars so to speak, he first ascended to the sky through the ozone layer to the moon to the stars and away, but even after finding new civilizations he could never find a race that didnt lose in the battle of time. So in the end he decided it was time for a change, Crash went back to the earth that was no in the year 2161 where he first engaged the earth with as much "show" as possible the goal was after all to make them notice him. Crash had created a gigantic spaceship, which was kinda impressive for his imagination, anyway within 5 hours off "showing off" he intercepted a transmission from the FUN(Federation Of United Nations.), they said "Hello We Are The Dominant Species Of Earth, We Do Not Want War." in every language known to them. Crash laughed at the idea of his own homeplanet trying to greet him as if he was a alien, but Crash replied in every language known to man plus a few more, Crash replied this "Hello Mortals, I Am C, Take Me To Your Leaders." as he said that he thought to himself "I always wanted to say that". After a week of communicating from the ship he decided to descend to the surface of the earth, he decided to do it over the ocean so he would still remain neutral, he was met by a multitude of ships all bearing weaponry that would be enough to wipe out new york, Crash was not afraid nor tempted to destroy the weapons onboard the boats, he knew they would cause more destruction to them than to him. As they approached him a man in a suit entered the biggest ships deck, he spoke in a microphone and said "We Come In Peace!" that was the present president of the united states of america someone known as "Charlemagne Capone", nobody except Crash could tell but Capone had an incredible aura of power it almost hurted Crash´s eyes looking at him. Crash was afraid what had happened for a human being to gain such extraordinary power, but Crash tried not to think about it for the moment. (to be continued) 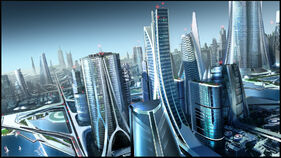 The World Crash Returned To-
Add a photo to this gallery
Retrieved from "https://powerlisting.fandom.com/wiki/User_blog:GodOfNerds/Character_Sheet_XXIV?oldid=1384255"
Community content is available under CC-BY-SA unless otherwise noted.