Kizuna Girls’ Academy is a prestigious girls’ junior and senior high school. Of the currently named schools in the the Imouto-verse, it is the school in Destiny City with the second most named characters, next to Destiny Military Academy. The school is located on a hill, and one needs to climb an inclination and a number of steps to reach its main entrance. It is assumed there is also an alternate way into the grounds, as staff members can park their vehicles inside the school grounds.

It is one of the five most prestigious schools of Destiny City and is said to be the most renowned girls’ school in the world. It is also mentioned that it had once sparked an international incident for refusing to admit a girl from a royal family because she wasn’t good enough.

Currently Midori Shinohara is the director/administrator of the school.

Entry requirement is a score on the Jewel Classing Exam and Kizuna's entrance exam of at least Rank C or higher, and the school currently contains a total of around 2,750 students. Of the 2,750 students, there are currently 180 Rank As, 1285 Rank Bs, and the rest being Rank Cs.

The uniforms worn by all Kizuna students seen so far have been comprised of a short-sleeved white dress shirt worn with black a skirt that reaches halfway down their thighs, but there are various uniforms depending on the type of classes they have. There seems to be no uniform requirement for socks or shoes and other additions, such as Tesla Dairenji's shorts.

It is mentioned like all other schools in Destiny City, Kizuna has a seperate set of uniform for winter time as opposed to summer.

It is puzzling that the junior high School's rules state that students are not allowed to wear casual clothes inside the school or in the dormitory (sleep wear doesn't count) as it is still part of the school, but the same rules to not apply to the high schoolers.

Test taking is located in the Illusive Hanging Gardens, an area inside Destiny City consisting of Kizuna and four other girl's schools, with a shopping area dedicated to the rich, nubile young girls.

The school is fairly large, other than the main building which probably holds its classrooms and two libraries, it also holds a track and field area and also a large swimming pool (which is used by staff to measure Tesla's power). The school also contains a showering area.

Magic Bath Facility is one of the three bathing facilities to be found in Kizuna Girls’ Academy. It is a subsidiary of the school, and is used exclusively for students to clean themselves up.

It is as large as five classrooms, and there are close to 100 showerheads. Each of them is separated by white partition boards and a sliding door. The doors aren't as big as the boards, which only hide the chest down to the thigh of an average sized middle school (and some high school) student from Kizuna.

It has advanced shower controls, lockers, tables for glasses and drinks, cabinets for various bathing implements, as well as ornamental plants, and seats for students to sit on.

Other than the usual events the school participates in like the Grand Destiny Star Games. Kizuna seem to hold a Midsummer Festival which is held in the dormitory that is not in the Illusive Hanging Gardens, here the students are to wear maid ensembles and have them welcome and serve guests, they give and invite the guests in demonstrations like flower arrangement, sewing, etc., and at the end of the festival someone from the festival is to give a exhibition battle and singing performance.

It is not known exactly how many Cliques there are in Kizuna, however it is known that a clique is an organization that functions like a scholar club.

Cliques are outlets for a group of students with similar goals to gather in school, to request for facilities and funding from the school’s board of directors, and to finally strike it big in a national event… Just by this definition alone, maybe a clique isn’t that much different from a school’s social club. Larger cliques will get more contacts, funding, and inside information, so most of these outstanding students in their areas of specialties have a clique backing them, the more accomplished the clique is and the better the reputation the clique holds means that they have a higher influence and can gather greater power than other cliques, even to the point where the strongest cliques can have power and influence outside the school.

Maria L. Sherlock pointed out that cliques "protect" their own positions and thus if a powerful individual outside the school starts gathering members for some purpose, it's likely that a clique or several of them will try to hamper such act. The largest clique in Kizuna Girls’ Academy belongs to Chiaki Kondō, who is even known as "the Queen Bee of Kizuna". 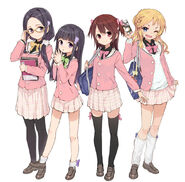 Add a photo to this gallery
Retrieved from "https://powerlisting.fandom.com/wiki/User_blog:Imouto-tan/Kizuna_Girls%E2%80%99_Academy?oldid=1132338"
Community content is available under CC-BY-SA unless otherwise noted.