Personality: Akuma emirates ungodly amounts of rage, wrath, & bloodlust. Despite this, he acts normally & is polite & can interact with people normally. His rage comes from being discriminated for the most part in the Japanese Monster community & the normal Japanese human community. Despite this however, he doesn't let this get the best of him however. Akuma respects all women even if they are thots; in the case of thots that pursue him, he will eventually slay them.

Akuma even without his powers is a very capable & powerful organism. His skills alone make him a force to be reckoned with. It's stated by even a racist Japanese superpower Mofia boss that if Akuma's power were stripped from him, he can still kill him (the Mofia boos).

Indomitable Will: Akuma possess an unusually high will power to be immune to all forms of temptation & has even more feats.

Indomitable Rage: Akuma has unnaturally strong rage that is never ending and ever growing. Through his rage Akuma can face great physical pain and psychological trauma and will refuse to surrender, literally using his anger to fight through the pain, possibly up to the point of cheating death and pushing himself past his own limitations. His rage can also act as a makeshift source of power for their strength.

Tactile Analysis: Akuma is an extremely skilled strategic genius and apply this skill to several objectives, able to create strategies and plans several steps ahead of the opponent. He can elaborate complex plans/strategies and apply them not only in battle but all activities that involve cunning intellect, e.g. strategic games. He can anticipate all of the possible obstacles/opportunities and know what the best actions to take in any situation, allowing him to adapt and prepare for future events in advance by considering a large number of scenarios/outcomes/options/paths, and plan ahead for them, to be ready for any situation that may occur and handle it effectively. Akuma's very analytical and can understand or anticipate the enemies' moves, and always be two steps forward in any situation.

Supernatural Unarmed Combat: Akuma excels in melee attacks without weapons on supernatural levels. Akuma's able to perform counters, techniques and combination strikes with such skill, speed, and prowess that far surpasses his monster & superhuman counterparts. Since Akuma's combative prowess is pushed far beyond the natural level, he's able to pull off hand-to-hand feats that are seemingly impossible for even the most skilled fighters that try to comprehend the Akuma's foreign skill.

Akuma's the son of the King of Monsters; a Monster that is extremely powerful that is arguably the strongest in history. Due to his Human/Monster physiology, he's what is known as a Wildblood which is basically a Human Monster Lord. These are to never be born due to their raw potential. His father is a planetary level threat. Akuma achieving Hybrid Vitality made him a galactic level threat & his father has stated that Akuma has the potential to be a universal threat & from their a multiversal threat.

His superpower monster side grants him various powers.

His mother's an Esoteric human granting him various esoteric powers.

Akuma is the son of the king of Monsters, Susanoo & a dark Esoteric human named Yuta Katsuki. Growing up in human Japanese society, he faced racial prejudice for being half Japanese. In monster society, he faced more physical prejudice. Since he was half human, Akuma had to wait until puberty for his powers to manifest. Knowing this, some monsters would assault him (not sexually though). Akuma would grow up to become angry individual but his mother taught him to harness his rage & channel that rage into something more productive. From childhood, she trained him to master his rage & master his the arts of combat. He also has an innate naturally high willpower. At a young age, he could be a word class supernatural assassin. When his powers manifested, he mastered most of his powers over the course of 6 months. He quickly gained a intimidating reputation in the monster community & human criminal underworld. There's been countless monster & humans who wanted him dead & either attempted to have him killed or they attempted to kill him. Either way, he would have them suffer & terrible death. Eventually though, Akuma would gain friend in the Monster & human worlds.

Azula's mix between a human & a monster. She's also full blooded Japanese as well. Despite Akuma being half-Japanese, she still followed after him out of wanting to get to know him better. He himself was shocked. He began to talk to her & they became friends. Soon after that, she actually began to express her romantic feelings form him which shock him not only for the fact that being him will be like hearsay but also because she's older than him. He glad accepted them but he made her promise that they couldn't do anything until he was old enough. She glad accepted & maintains the promise greatly.

Zensu is a monster/alien hybrid augmented by bio-tech. When they first meet, Zensu was on a rampage wanting to test his new found strength. They battle & had fun. Zensu was Akuma's first best friend. They train frequently & they hunt monster together.

Aku is a human/Werebeast Lord hybrid. Due to being prince-like hybrids, the bounded barely quickly & became friends. Aku helped Akuma be more compassionate towards others. 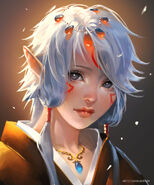 Armora is an Elf warrior that wanted combat evil monsters. She lack faith in herself & she wasn't able to achieve her dream athirst. She stumbled across Akuma one night. Know his reputation, she was terrified of him. He & his friends showed that he wasn't as evil as he was made out to be. She eventually became part of their group & she was trained by them gaining enhanced physical prowess & other skills.

Lula's an older sister figure to Akuma. She's really & truly his cousin. Lula & Akuma usually are very happy when they are together.

Kirijo is the first human friend he made. Kirijo is a human who wanted to be a monster & he functioned as Akuma's human perspective. Kirijo helped Akuma see that humans are just afraid creatures because they can practically die from anything. Akuma actually trained Kirijo to the point of achieving monster-level bodily condition. 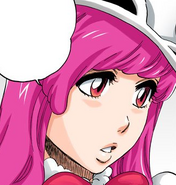 Sally, despite being older than him, is like his little sister. Long-story short.
Add a photo to this gallery