"It walks... like a man!"
― Shaw's reaction after seeing Elliot the deer. Open Season

The power to move, act and run on two limbs in a bipedal manner.

User can move, act and run on two limbs in a bipedal manner. Bipedalism is a form of terrestrial locomotion where an organism moves by means of its two rear limbs or legs. An animal or machine that usually moves in a bipedal manner is known as a biped /ˈbaɪpɛd/, meaning "two feet" (from the Latin bis for "double" and pes for "foot"). Types of bipedal movement include walking, running, or hopping.

Few modern species are habitual bipeds whose normal method of locomotion is two-legged. Within mammals, habitual bipedalism has evolved multiple times, with the macropods, kangaroo rats and mice, springhare,[4] hopping mice, pangolins and hominin apes (australopithecines and humans) as well as various other extinct groups evolving the trait independently. In the Triassic period some groups of archosaurs (a group that includes crocodiles and dinosaurs) developed bipedalism; among the dinosaurs, all the early forms and many later groups were habitual or exclusive bipeds; the birds are members of a clade of exclusively bipedal dinosaurs, the Theropods.

Perry the Platypus ([Phineas And Ferb) 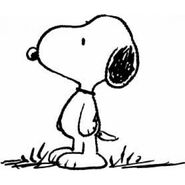 Snoopy (Peanuts)
Add a photo to this gallery
Retrieved from "https://powerlisting.fandom.com/wiki/User_blog:Nengyko/Bipedalism?oldid=1417869"
Community content is available under CC-BY-SA unless otherwise noted.