Kyros (One Piece) can operate in a fight on one leg.

As one of the Yonko, Shanks (One Piece) is one of the most powerful men in the world, and the loss of his left arm did not hinder him in the slightest.

Sesshomaru (Inuyasha), by his own admission, actually became stronger after losing his left arm to InuYasha.

Big Boss (Metal Gear) was unhindered by the loss of his left eye, and was also able to embark on Operation Snake Eater and successfully complete his mission despite having suffered numerous severe injuries only a week earlier.

Neo (The Matrix) remains a skilled martial artist despite having his eyes cauterized by Smith. 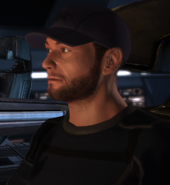 Joker (Mass Effect) is a master pilot despite suffering from severe Vrolik's syndrome in his legs.

Toph Beifong (Avatar: The Last Airbender) is one of the greatest Earthbenders in the world despite being born blind.

Zatoichi (The Tale of Zatoichi) is a supremely skilled swordsman despite being blind.

After being render paraplegic by Clock-La, Bentley (Sly Cooper) remains a capable field agent due in part to a high-tech wheelchair.

Despite being paralyzed from the waist down, Joe (Family Guy) was able to remain on the force and able to take a fight even being in a wheelchair.

Even when his arms were incapitated, Zabuza Momochi (Naruto) killed most of Gato's thugs and Gato, as well, with only a kunai in his mouth.

Despite losing his left hand, Crocodile (One Piece) makes up for it by having a hook.

Even when having both of his arms destroyed, Deidara (Naruto) was able to hold off against Team Guy.
Add a photo to this gallery
Retrieved from "https://powerlisting.fandom.com/wiki/User_blog:Nengyko/Handicapability?oldid=1468080"
Community content is available under CC-BY-SA unless otherwise noted.