Para Brahman (Hinduism) is the "Highest Brahman" that which is beyond all descriptions and conceptualisations and thus perfectly transcends all things.

"God is a being of transcendent and unlimited perfections: his nature therefore is incomprehensible to finite spirits."
― George Berkeley

It's impossible to categorize or find an exact description for them in any way as they exist completely above and beyond all classification and definition. They are unbound and defy absolutely all things even logic itself.

Usually, Users of this power are limitless, eternal, timeless existences with no beginning nor end and are beyond the notion of personality and individuality. They cannot be grasped or understood as a concept at the core of themselves. Users are also distinguished from the totality of all existence as there very being completely out-classes it, comparing the user to everything else would be like comparing a grain of sand to infinity and thus the user would hold truly unfathomable power greatly exceeding the entire framework.

While they may transcend all things and nothing can apply to them unless they wish it too, they may also not be truly all-powerful beings.

You are perfectly above all others. 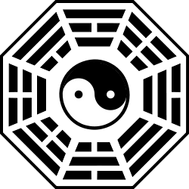 The bagua, a symbol commonly used to represent The Tao and its pursuit.

Monitor-Mind The Overvoid (DC Comics) transcends and encompasses everything in DC Comics.

The Luminous Being (Forgotten Realms)