Quotes: "War is not something i enjoy, but it is something that is and will be forever"

"Everything or one fears war might come to them, i dont understand, it wont come to them its just a matter of time till it begins"

Occupation: Absolute Embodiment Of Destruction in the Multiverse, Former Archangel Of War, Horseman Of War, War Bringer, Bringer Of The Apocalypse

Before concepts, such as, time and space existed, there existed a void, both infinitely small and large. Inside this vast expanse of nothingness, existed one being, He Who Is Unknown. This being created an infinitesimally small point inside this vastness. This point would later be known as the Origin of Origins, the Alpha Reality. Using its awesome power, it split itself into two beings. One being would become known as God and serve as the creator. The other would serve as the destroyer. God went on and fashioned a new reality from the Alpha Reality, however, he was not pleased with his creation, so he had his brother, The Destroyer, destroy it. Before he created another reality, he fashioned concepts from the Alpha Reality, to use in his soon to be created multiverse. Each of these concepts were given power over their namesake.

Destruction has been fulfilling his existential purpose, to destroy universes and multiverse just like his master, The Destroyer, does. However, after countless eons of doing so, he has grown bored with such action and wished to manifest himself as a different concept. Seeing that there was no embodiment of War in existence, he took on such a form for a time. As War, he ravaged the multiverse with his conflict and namesake. In time, he grew bored once more.

God soon approached him in his boredom and asked him to be his Horseman and Archangel of War. War thought this was a great way to eliminate his boredom so he accepted the offer. Using his vast power, he made an angelic body for himself and dubbed it “Arepoh”. Sometime before Samael’s fall, Arepoh learned of a plan to attack the humans by a great, powerful demon horde. Fearing the worst for the humans, he taught them how to defend themselves through the creation of weaponry and armor, he had taught them war and the secrets of Heaven. Adriel and the other Archangels found out and were appalled by his actions, for he had broken divine law. Asahel tried defending him and praised him for such a courageous and gracious act but the others made it so that his vote of innocence meant nothing.

Even though it was the right thing to do, he was stripped of his position as an angel and cast out. Now taking the name Azazel, the scapegoat, he was rejected by both Heaven and Hell. Asahel fell immediately afterwards, appalled by the dogmatism of Heaven.

Azazel no longer cared about the eternal struggle between good and evil. All he cared about was his own freedom and the pursuit of his greatest asset, war. To this extent, he took on a multitude of forms and caused many of the wars that shook the very foundation of human and magus civilization. Because of this, he and Azrael, Asahel’s (now Samael) replacement as the Archangel of Death, have come into conflict several times over several millennia. They battled countless times, some he won and some he lost.

Description: Malthael is one of Azazel's Lieutenants and right hand man, Azazel met Malthael as a child taking him in, teaching him warfare and combat, Azazel gave malthael the chance to live a normal life, but malthael declined and said he wanted to be in Azazel's army, Malthael would get no special treatment and soar through the ranks.

Occupation: Absolute Embodiment of Death in the Multiverse, Archangel of Death, Keeper of the Alpha Reality, Horseman of Death, Nemesis

Description: Azrael is the archangel of Death replacing Asahel (Samael), Azazel and Azrael have come into Conflict over war between Humans and Magus civilazation, battles would be fought on barren worlds and some won some loss.

Legions Of Azazel (Aka Azazel's Armies) 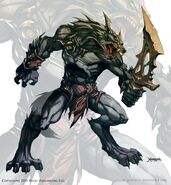