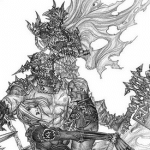 DYBAD indeed ^ ^ Only a couple weeks left before I can get back to my original account.

So there really wasn't much new content ever since the original manuals (game/world/bestiary) and the couple magic/combat additions that followed. Its a shame, the melting pot of awesome abilities, archetype inspirations and epic monsters drawn from many sources (especially animes/mangas) and the very intriguing world where so much is going on behind the scenes really had a lot of potential.

Is ABF truly a spanish creation ? I noticed the manuals were originally in spanish and took an oddly long time to translate in this day and age, despite oth the visual style and in-game materials showing a lot of asian influences.

GoM games ? You mean the ones featuring Celia as main character ? I remember reading about it a while ago.

What are WoG ? Sorry for my ignorance of what is probably a given to many. I never really played the tabletop game itself, but was fascinated by the very rich world and lore, and how they superbly blended so many inspirations into a coherent whole.

Thanks again for the link ^ ^

Any idea why the world has been so frozen all these years ? No enough success to develop the primary materials ?

Do you know the name of the tabletop game based on the same system that was launched by ExRegnum ?

Strange for a man who likes his work to just leave it hanging indefinitely ^ ^;

I'll be looking forward to this Regnum Ex Nihilo alternative, hopefully it will come out in english too.

Retrieved from "https://powerlisting.fandom.com/wiki/User_talk:Antoniofer?oldid=1385234"
Community content is available under CC-BY-SA unless otherwise noted.