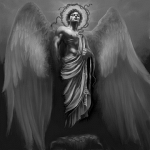 white phoenix of the crown

The white phoenix of the crowns power is literally unlimited. as it is capable of manipulating all of existence(the entire omniverse and beyond)as its power is called Existence Mastery.

From the marvel wiki page on the Phoenix force-

Existence Mastery: It possesses total control over the entire existence as shown by The White Phoenix of the Crown (c.f. The White Hot Room). It can warp the reality, bring anything into existence, freely manipulate all existing things, and return them to nothingness when their purpose is extinguished. Its immeasurable cosmic powers and abilities appear to be at their strongest and most powerful when bonded to Jean Grey ("the One-True Phoenix" who is completely compatible with the entity, possessing incredibly strong and powerful levels of telepathic, empathic, and telekinetic godhood status abilities, complete control and manipulation over the realms of matter, energy, space, time, existence and thought), as the two have a strange, profound connection to each other (Jean is the closest thing the Force has to physical form). It has yet to explain how Jean is "the true phoenix" and why.

Like Jean Grey-Summers, the Phoenix used telepathy and telekinesis, but at a much, much greater near-limitless power levels (unlimited as White Phoenix). She was able to rearrange the molecular structure of matter and fly at high hyper-sonic speeds while inside a planetary body. Using the Phoenix Force, she could travel through hyperspace and destroy Shi'ar battle cruisers with little effort.

It would follow then that you'd be able to provide proof of her "unlimited power." A fucking wiki does not count. The comics have never said that the Phoenix is omnipotent. If you're going to continue to put her in the list of users, then your standards of evidence are very low. Haloboy123 (talk) 05:18, June 21, 2016 (UTC)

She literally manipulated all of existence from outside of it, that picture is her actually holding existence itself. The only other individual with that power is the One-Above-All. Not even the living tribunal has that power.

if the wiki doesn't count then all the users on every page should be removed and this wiki would be empty.

Get it through your head already, the wiki is the source of information for every power on here. What it says on there goes. End of story. you have no say about that fact, as it is the source of proof for everything on here.SageM (talk) 05:25, June 21, 2016 (UTC)SageM

Are you fucking dense? I'm assuming this is the picture in question: 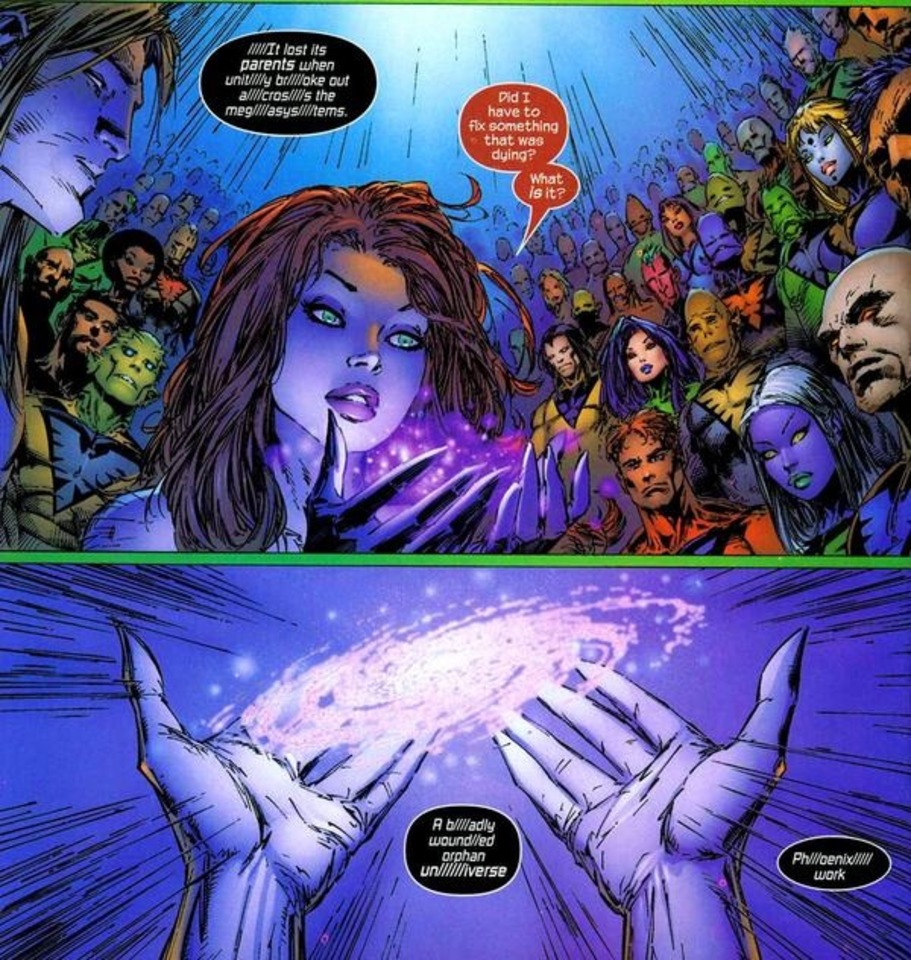 If that's the one, the thing she's repairing? That's a single timeline. That thing she's holding? A single fucking universe. Given how many there are in Marvel, it should easily be concluded that she was not manipulating all of existence.

Let me show you a similar picture: http://static.comicvine.com/uploads/original/10/102593/3528550-01.jpg  It says in the scan that that was a baby universe, but given your abilities, you would have concluded he was manipulating all of existence had the wording not been there.

And if the wiki is truly the only source of information for powers on here, than this whole goddamn site may need a lot of editing. It would be a lot smarter to use multiple sources of information, including the comics themselves.

The information on the wiki comics from not only the comics but the creators who have confirmed it.SageM (talk) 05:41, June 21, 2016 (UTC)SageM

The White Phoenix's power is second only to the One-Above-All, as he is the only other being who possesses existence mastery. this is canon, it was confirmed by the creators. Existence is basically her toy for all intents and purposes as she is the reason why it even exists.SageM (talk) 05:46, June 21, 2016 (UTC)SageM

No. It doesn't. Creators from the comics haven't bothered to confirm most of the stuff on the wiki. Occasionally you get guys like Brevoort who answer questions, but by and large, they don't bother. Why is that one wiki, edited by fans just as fallible as we are, your only source? Why not this site: http://marvel.com/universe/Main_Page           Are you too lazy to check and see whether or not Phoenix's power of "Existence Mastery" is bullshit? Especially given that she has never been shown to manipulate an entire Omniverse (because that's what Marvel Existence would be, not just a single universe)?

That would be believable, given that it seems you are refusing to listen to logic by undoing my very valid changes to the page. This is the Darkseid/Absolute Strength situation all over again. I gave up on that since you refused to reply, but I won't let this go. Not until you give me some valid proof that Phoenix has infinite power. Not until you show me a scan stating that the Phoenix is second to TOAA (when did the Phoenix Force become the fucking Living Tribunal?) Not until you show me where the hell a writer confirmed this. Again, a single fucking wiki does not count. Haloboy123 (talk) 05:52, June 21, 2016 (UTC)

Come on Sage, if you believe so fervently that Jean Grey possesses infinite power, surpassing the likes of Living Tribunal, the Beyonders, and the rest of Marvel combined, then it shouldn't be that hard to provide the evidence. Also, I feel the need to say this again since apparently you don't get it: A SINGLE WIKI DOES NOT COUNT!!! Haloboy123 (talk) 05:59, June 21, 2016 (UTC)

Life and Death, Destruction and Creation, she is the font for it all, without her nothing new could ever come into being. whether its life, the universe, the omniverse or anything else. She is the Guardian of Creation, it is her toy and always has been and always will be. the comics have confirmed this time and again. By Roma, by Eternity, by the watchers, and yes even by the tribunal.

In a sense she has the same general role as the Life Entity does in DC Comics(without it life and the universe couldn't exist, which is why Nekron tried to destroy it)

There can be no existence without her. End of Story.

Also another way to consider it, when creation began the phoenix came into existence. The Living Tribunal wasn't created until after creation already existed. The Phoenix Force is second only to TOAA in age.SageM (talk) 06:05, June 21, 2016 (UTC)SageM

The Living Tribunal was created as a judge over creation, which means there would be no reason to create him until after existence was created, and the Phoenix was the spark of creation. Meaning she is literally the first being outside of the TOAA.

The Living Tribunal was not made until after existence was made. that is canon. Which means that the Phoenix is equal to TOAA and the LT.SageM (talk) 06:10, June 21, 2016 (UTC)SageM

Now I know you must be dense. You don't get to say what I would do if you gave evidence. 1. You don't know me as a person enough to make that claim, and 2. You have yet to actually provide any.

8a1. When you change the main pic, old one goes to Gallery.

Stop messing with Supernatural, new pic is good and old one is in Gallery. Second warning from Admin and the page is locked. If you want to argue your piece, do it on RoyalGuard-Elite's talk-page. --Kuopiofi (talk) 14:53, December 18, 2017 (UTC)

Go troll somewhere else. You kept reverting my edit and didn’t even give a valid reason as to why. You even got into an edit war with an admin as if you could win something like that. Honestly Kuo has more restraint than me because I would have banned you. --Я☻ҰĀℓğטĀЯб-Єℓ│דЄ (talk) 18:32, December 18, 2017 (UTC)

OK, that was a mistake on my part, but, do you notice any other lordship pages being in the applications? No? There is your reason for why it got removed, it just stuck out.

How about I just remove Magic Transcendence all-together because Science-Magic Ascendancy is already there, that seems fair to me. CrabHermit (talk) 05:49, May 9, 2018 (UTC)

Just a note: Page Creation and Details "Don't add Embodiments or Lodrships to pages unless they are Variations of that power (ie. not into Variations among others, Variation of that power) or in Associations. They have implications that plain Manipulation doesn't have." --Kuopiofi (talk) 05:52, May 9, 2018 (UTC)

Retrieved from "https://powerlisting.fandom.com/wiki/User_talk:Haloboy123?oldid=1441602"
Community content is available under CC-BY-SA unless otherwise noted.