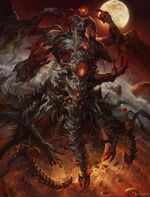 Hi, welcome to Superpower Wiki! Thanks for your edit to the Divine Slayer page!

Because original haltiat (correct plural) weren't in any way elves as you think them today. They were local spirits of place/concept and originally not even particularly physical beings. You could consider something like Greek daimons, except there were far more of them and only the more powerful could be considered individuals, most were more of force with an agenda/limited personality. When given form range from a sort of gnome (those living near humanity), merfolk/nixies, or usually humanoids with features from the concept they were connected to.

For some reason translators used that word for elves and it stuck, so haltias = elves is literary concept, not mythical/folkloric one. If you add haltiat to Transcendent Elf Physiology, it should be from some other source than folklore/mythology because those are spirits. --Kuopiofi (talk) 14:35, August 3, 2019 (UTC)

With haltiat the line between beings and force is pretty flimsy (see väki in Wikipedia page). --Kuopiofi (talk) 18:39, August 3, 2019 (UTC) How does that connect to this? The whole argument is about whether they are physical or not, it's about whether haltiat are elves. And for some reason why I didn't remove sidhe from the Users.

To quote the part that brought sidhe to this: "Elves are already considered spirits in mythology, and when someone added the sidhe to the page, you were in no hurry to remove it despite the fact they are not classified as elves." After that I answered that they were physical beings and so on.

"So, were sidhe considered spirits/non-physical?"

Could you link/quote the exact place you're talking about in future? Having to go through the whole page is bit much to find that one detail. --Kuopiofi (talk) 04:21, August 7, 2019 (UTC)

When I was correcting the page by accident I deleted it.~~User talk:Arquetion

Not even anywhere near to that fact. At the same time, Jesus is not an incarnation of a Human, he's the incarnation of God himself, so please don't get the wrong idea of him. ChocolateElemental (talk) 20:23, August 29, 2019 (UTC)

Please Stop This Storm Inside your Teacup

Jesus Christ is a godly incarnation of God himself, nothing more. Please read the rules before getting riled up for simply reversing one of your edits.

Well, I'll be honest with you dude, religious debating is a delicate thing and must not be resorted too, like it or not. If you've learned nothing from that still, then I'm sorry, but you'll still have to refrain from debating religious points, otherwise you'll get yourself banned from the wiki. If you don't care otherwise, that's your own problem. ChocolateElemental (talk) 14:52, September 1, 2019 (UTC)

Will you please stop acting like a seven year old and just stop harassing me for God's sake? If you would persist, then I will have no other choice but to get one of the administrators involved to dissuade you from continuing. If you still persist, then you'll get yourself banned for God knows how long. Cease and desist with this behaviour and you'll have no problems. ChocolateElemental (talk) 07:14, September 2, 2019 (UTC)

DUDE, THAT'S A SLANDEROUS LIE!!! My approach to debates in threatening certain people that disagree with my actions is NOT how I even work. I have made it painfully clear that religious debates is a sensitive thing. The Islamic, Judiastic, to Christian doctrines are all different from each other, yet Jesus tends to be depicted differently. But the flaw to your logic, is that we don't even know for sure which doctrine that Jesus has appeared in is more faithful to either of those doctrines. So overall, no, Jesus will never fit the Transcendent Homo Superior Physiology article, so please stop painting me as the villain and stop aggravating the situation to an unfathomable margin. ChocolateElemental (talk) 07:47, September 3, 2019 (UTC)

Should I give you both few weeks timeout since neither of you is really behaving that well? Both of you are shouting and insulting each other while complaining when the other one does the same thing.

You want evidence? Here, this article explains what Jesus really was.

Very well then, I'll give you a pass for now, but that still doesn't change the fact on how badly you've reacted towards me when I was reverting your edit. It's also the fact that not only does Jesus not fit, but it will likely cause some ire and/or confusion in certain people, and this will likely cause some editorial fame wars in the process. Okay look dude, I apologize for being aggressive, I was only trying to keep the wiki in good quality control so nothing that's documented would have incorrect information. ChocolateElemental (talk) 21:41, September 3, 2019 (UTC)

Retrieved from "https://powerlisting.fandom.com/wiki/User_talk:Morningstar123?oldid=1394279"
Community content is available under CC-BY-SA unless otherwise noted.