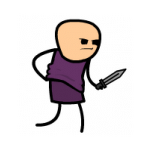 Hey, just a heads-up; your signature is redirecting using to your talk page on the Doom wiki instead of here. If you set the link as this (with the double (square) brackets; view in source), then it'll always link to your chat page on the wiki you commented on. ~Pteraclaww 16:51, April 2, 2012 (UTC)

Maybe somebody could sort of broadcast around the wiki, then there could be a forum where people post their character profiles e.g.

Bio: Peter Parker's parents died when he was younger, his Aunt May and Uncle Ben took him in. A few years later, Peter was on a school trip to Osborn Industries, he got bitten by a radioactive spider and gained arachnid superpowers. At first he used his powers to become a wrestler, he saw the wrestling ring being robbed but let the robber get away. Peter went outside and saw people crowding around, he walked over to see his Uncle Ben bleeding on the floor, the robber had shot him and he as about to die, his final words to Peter where "With great power, comes great responsibility". Those words inspired Peter to fight crime in Ne York City.

So like that but with their own characters, maybe with more detailed backstories, they could be set in current comic universe or their own.

Uncivility? That is a bunch of bull. I didn't even do anything.

Now wait a minute. I demand to know the reason instead of being cheated by an unfair block.

... Oh gimme a break. Kuopiofi is always undoing my edits everytime I make one. And someone had to shut that Hal Jordan wannabe up. Not to mention, look around this wiki, EVERYONE here is a jerk at times, so you might as well block everyone here. Not to mention there are people far worse than I and I didn't even get as so much as a single warning. No, I got a full block. I find that completely unfair.

Why have I been blocked from something that happened in the pastUser:Truth™ I mean what have I done that made get blocked in the last 2[two] months{That Mystic Martial Arts Thing was the past}? Please answer me? Remember this the User:Truth™ see ya'!

New to the Wiki

First off, who are all the admins? I think this would be a nice peace of information to know.

Secondly, is there anything I should be aware of before I start editing? Ground rules, do's and don'ts, or anything else along these lines?

Edit- Thanks for leting me know. I left some suggestions on Thekingsman talk page if you want to see them.

Is it just me, or is search-function for some reason stopped updating the renamed pages?

Bit clumsy question, but basically I noted it first time when I realized that using the search still gives only Mammal Mimicry when the page was renamed as Mammalian Physiology moths ago, other pages that refuse to update to never names are Avian mimicry (now Avian Physiology), Reptilian Mimicry (R. Physiology) Snake Mimicry (S. P.)... well it seems to do that with all animal pages that have been renamed during the last few moths. Same goes for Stellar Physiology, Shinto Deity Physiology ‎ is still Asian D. P., Life Mastery is Bio-Creation and Deletion...

And on the second look, it doesn't seem to be updating some new pages either, try searching Soul-Bound Weapon (writing "soul" doesn't give anything), same with Life Creation.

Could you fix Mammal Mimicry-page so it redirects right to Mammalian Physiology?

Second question: have you noticed anything strange with search-function? Because for me at least it doesn't update the renamed pages at all (search-bar gives the original names even after they've been changed for weeks): I've mentioned about it to Thekingsman but he's apparently too busy to look at it, and when I reported Community Central they can't even see the problem.

Hey I was just wondering why the chat room is not working?(Magneto101)

The "Material Powers" Category page is now empty and ready for deletion, whenever you are.

Here is another Natural Lightning Empowerment it is a form of Electricity Absorption. They are similar in everything except in names.

Listen, Ihu wants to make changes to the home page. The pictures look great but the style is kinda outdated. I need your okay because you are the one the does it.-Thekingsman 17:33, June 19, 2012 (UTC)

Hey omni :) how come my manifestation page was deleted

Hey omni :) how come my manifestation page was deleted?

Sorry if you got this message twice, my internet screwed up as i sent it LOL!

why did you redirect particle beam emission? if you did.

I need you to keep your eye's open because a user Hevenslovetherage want all crazy. He is planning to change his Ip addrass and making a new account. Read my massages, and Rajins you will understand. He did hurt my pride though. What I can't understand is why did he went off like that.-

what the reasson of delets the data solidification, ( on next day the digital materialization is created, basicaly the same thing) and is not deleted. I dont't like the copy of my page is don't deleted (is the same thing), i am confuse

if you understood my sadness, please put a good answer on my discussion page, i want know the reason of you delete my two pages and leaving the copy of my page intact

I understood you mistake, i go forgive this

I glad you liked it ^ ^ Though it was created by someone else under a different name, and the description was somehow a little disrespectfull to the gentle gender - hence the comment :P DYBAD 21:20, July 8, 2012 (UTC)

dude what did you do to the page dont mess with other people pages like that the page was fine when you thinking of doing something or something is not right tell me thats the same thing that happen on blade projection i am not trying to discredit your opnion or anything but just dont do it again ok, cause psychology is very different form mind manipulation.

why would you delete everyone liked the power you can not go erasing other peoples pages like that when every one liked.and its a mental power if you have something else to say to me tell me straight.

i think you are been unfair with the page and i belive this is an ability.but if you think you can or have to combine with psychological manipulation or any other pages do it.I just thought since people posted positive comments it would be okay for this page to exist.One more thing i thought wikias were about community and everyone opnion matter and i know this is superpower wiki like you said.Sorry if i misunderstood or arrogant.Brought to you by INTER KID

I know that you blocked Raijin7 not to long ago for language, or insults. I am going to get him a lighter sentence becasue he is still trying to stop that kind of stuff. I will give him one final warning.-Thekingsman 00:10, July 23, 2012 (UTC)

Do you got something against me or sommin? why did you cry to Kings, talking about the things I said over a CENTURY ago? why didnt you just delete the comments and move on? if i said sommin else extreme, then i wouldve saw why you banned. This isn't to be offensive or anything, just getting sommin off my chest. And yall should really give out warning before banning and stuff, a better structured ORDER system. peaceRaijin7 (talk) 21:32, July 25, 2012 (UTC)Raijin7

aye ok. you should really lay off on banning people so quickly and its starting to look like your banning without mercy like you enjoy it or sommin. look like an evil banner, And i think you should leave the banning up the Kings tooRaijin7 (talk) 22:38, July 25, 2012 (UTC)Raijin7

Why did you delete my article?

Thank you for deleting the page Omni from Truth™.

Too bad, it was an interesting and widely used power, so it did deserve it's own page. But I guess we just can't prevent people from induging their lamest instincts... DYBAD (talk) 23:05, July 31, 2012 (UTC)

True, but the thing with Magical Girls is that all their powers are the direct result of their speficic Powered Form (like Iron Man and is armor - Iron man is the armor), although they are effectivey limited to Magic alone.

Oops, I think I might have deleted it. I will restore it. Sorry, about that.

the power Speed Counting is very similar to Gale-Force Reading plus the power does not even make any senseJ. Veteran (talk) 22:34, August 10, 2012 (UTC)

I would like to report a fellow editor who has broken one of the rules of this wikia Consus, the Erudite God by swearing without a good reason.

Juneran, You break rules constantly. One rule of the Wiki community is that you are not allowed to erase messages on your talk pages unless they are vandalism. I gave you responses not vandalism. You do it every time you get a message from me so you should be banned alreadyConsus, the Erudite God (talk) 16:51, December 12, 2012 (UTC)

I posted a video a while ago on this website, but the video no longer exists.  It is taking up space on the website and I would like both the video and the page it is on to be deleted.  The video is titled: Superhero Youths The Young Guardians and the Genesis Spell Protect.  Please contact me as soon as you can and I hope to hear from you soon.  Jedi Legacy (talk) 06:16, December 11, 2013 (UTC)

I had this big long detailed report on your talk page explaining an event that lead to injustice on this chat room but unfortunately computer's mess up and everything I did was gone I instantly forgot it and was devastated.

I'm going to put this as short as possible: One of your chat moderators was trolling, harassing, arguing, and overall being an impulsive dirty crooked right abusing chat moderator.

Please do an investigation on this and ban this mod.

I've chatted with death horseman, and he has shown me snapshots of the chatroom. Check my talk-page history to see for yourself, but it clearly shows Deathhorseman being innocent, and showing no signs of trolling/harrasment of the accuser. I don't think any action should be taken against him, as he has done nothing wrong. Gabriel456 (talk) 21:53, February 9, 2015 (UTC)

Removed during the time you haven't been active.

Retrieved from "https://powerlisting.fandom.com/wiki/User_talk:Omni314?oldid=1427669"
Community content is available under CC-BY-SA unless otherwise noted.