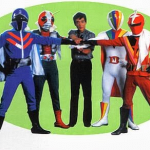 Hi, welcome to Superpower Wiki! Thanks for your edit to the Enhanced Jump page!

Why do you keep deleting what I add to the Limitations section of Spatial Mimicry? It's just as legit as the stuff you've been putting in.Ihu rules! 19:18, October 31, 2011 (UTC)

Well Sonic I'm sorry for what Truth™ did to the page. Truth™ should have asked before it toke and messed it up more. So Truth™ erased everything on the page because before Truth™ read that comment you left Truth™ thought the page was good. So I the one the only Truth™ is saying he is sorry.

Your edits on the Electrical Beam Emission page are redundant. It already says "low level users".

so, do you just choose ignore what we say? Plasma Generation is CREATING plasma, not controlling it at any level. stop freaking adding it!Gabriel456 20:54, July 6, 2012 (UTC)

I'm being a "baby" because those powers just create the plasma/element, not control it. Plasma Manipulation and Elemental Manipulation generates and controls plasma/elements. Those pages are limited to generating it but not controlling it. there's a difference.Gabriel456 21:40, July 6, 2012 (UTC)

Well let's see, your throwing a tantrum like a child, do basicly your acting like a baby.

I'm just saying that those are just generating them, not controlling . otherwise, I might as well redirect both of those pages to Plasma Manipulation and Elemental Manipulation Gabriel456 21:47, July 6, 2012 (UTC)

Sonic, are you actually being serious right now? I don't know whether you're just not reading these and are completely oblivious to what blocking you must mean, or you're just intentionally trying to be annoying.
Either way, you repeated your offences again after the previous block had expired, and so you're kind of forcing my hand here. This time, you've been blocked for a week. If you continue, yet again, after this block runs out, then the next block will be longer yet. ~Qofi 23:38, July 9, 2012 (UTC)

Okay Okay i'll stop, and i only did it one time again. So i don't see why i have to be blocked just for one edit.

Why? Because you've done it over and over and over again already. We've heard literally nothing from you until now, and after being cleared from your block, you went back and did again exactly what you were blocked for before. If you can honestly say that you're not going to do it anymore, then I'll unblock you tomorrow morning (GMT-7). ~Qofi 23:52, July 9, 2012 (UTC)

What is with you always changing Chi Manipulation?

Well most of the stuff in Chi Manipulation is mostly wrong.

That doesn't give you any excuse keep messing things up on the page I've made. I suggest you explain what is wrong instead of running off after every edit. Plus, I've noticed you've been doing it one too many times, so are going to cooperate or do I need a mod to that for you?

Well for one thing you have to have a strong will to not be corrupted. Second it also deals with spirituality aswell.

And another thing, isn't chakra supposed to be the combination of both physical power and spiritual power?

You got that information from Naurto, which is completly unreliable. Plus, it doesn't matter if one's will is strong or not, it can still be corrupted. Vegeta's will was strong, yet his power was corrupted by Babadi.

Didn't he give in to Babadi to gain more power to fight Goku?

It doesn't matter why he did, he was corrupted, thats all that matter.Do not mess around with the page again.

You're really pushing it

Apparently I was not clear the first time. Cut the crap, or I'll get someone to make you.

Threat nothing. Its warning and I suggest you follow it.

You are really working my last nerve. Stop messing up the page.

Considering how many times you've already been told to stop messing around (just reread this page), you need to ask?--Kuopiofi (talk) 20:53, November 15, 2012 (UTC)

Couldn't care less actually, that was just a reminder that I'm not the first or only one to delete your editions. I delete/change every/anyones editions if they look like they need to, so don't feel special or specifically picked on.

Incidentally, please use signature button (on top, fifth from right, looks like writing on it), makes answering so much easier.--Kuopiofi (talk) 06:11, November 16, 2012 (UTC)

First time I've heard about that, so no idea.

Welp, the Founder seems to be Blackwings369/[Blackwings369], and he's pretty open about that he's copying things from here to his site (and there are few others from here too). Personally I don't really have much against that, although he could ask from the makers of those pages about it.

I'm making exception this once, next time make sure the link is there.

We've kept magic and energy separate because raw magic is quite a bit more than simple energy. In a way you could call it manifested probability/possibility as while magic can act like any/every form of energy, it can also act as matter, transform matter/energy, affect mind/soul, etc. --Kuopiofi (talk) 18:40, July 4, 2016 (UTC)

Retrieved from "https://powerlisting.fandom.com/wiki/User_talk:Soniczero000?oldid=796600"
Community content is available under CC-BY-SA unless otherwise noted.