Steal the powers of a chosen one.

The power to steal the powers of a chosen one for themselves. Variation of Power Absorption. Opposite of Destiny Chosen. Not to be confused with Unchosen One.

User can throw a wrench in the works of destiny by taking the place of a so called chosen one for themselves. They can wield legendary weapons they shouldn't be able to, steal the spotlight from the guy expected to win or do the great feat that everyone thought only one guy could do. 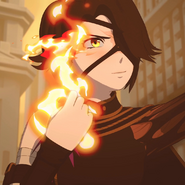 Cinder Fall (RWBY) became the Fall Maiden after she stole Amber’s powers.
Add a photo to this gallery
Retrieved from "https://powerlisting.fandom.com/wiki/Usurp_Worth?oldid=1612331"
Community content is available under CC-BY-SA unless otherwise noted.