Use the traits of vaewolves.

"Half Vampire... Half Lycan... but stronger than both!"
― Singe (Underworld)

A user with this ability either is or can transform into a Vaewolf, a hybrid of a vampire and a werewolf which takes an equal amount of characteristics from each parent species. For instance, most vaewolves still need to consume blood regularly and may still be affected by the presence of a full moon.

Hope Mikaelson (The Originals/Legacies) is the daughter of Klaus Mikaelson.

Eve (Underworld Awakening) is an evolved vaewolf, magnifying all the parent species' strengths, while retaining little to none of their respective weaknesses.

Nina Pryce, the Vampire By Night (Marvel Comics) was born a werewolf and became a vaewolf after being bitten by a vampire. 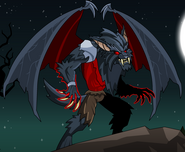 Wolfwing (AdventureQuest Worlds) is a Werepyre, a balanced vaewolf that displays equal traits from each parent species. 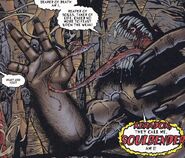 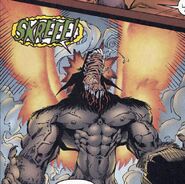 ...who is as long reached as he is long fanged.

Akira (Dance in the Vampire Bund) after having been spliced by Mina with her blood became a powerful were-vamp hybrid. 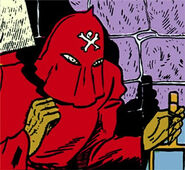 The Monk (Batman) who in the Golden Age was both vampire and werewolf.

Vrykolakas (Valkyrie Crusade) was a werewolf that became a vaewolf upon death.

While she is a snake, Serpent Vampire (The Haunted House/Shinbi Apartment) consume Ian's blood and Jihoon's blood to transform into...