Use the traits of valkyrie.

The power to use the abilities of Valkyries from Norse Mythology. Variation of Norse Deity Physiology, Grim Reaper Physiology and Angel Physiology.

User with this ability either is or can transform into a Valkyrie, one of a host of lesser divine female figures from the Nordic pantheon who decide who dies and wins in battle. Selecting among those who die in battle, the valkyries bring their chosen to the afterlife of the slain.

Valkyries have abilities relating to their duties as choosers of the fate of slain warriors. They can sense when a warrior is about to die, arrange that this warrior will die, defer the death so the warrior can survive to grow in skill, and they have the power to take the chosen warrior's soul with them. They are able to move around unseen and some can take forms of birds or animals or fly with wings.

As Shieldmaidens, they are skilled fighters, with several lifetimes worth experience.

A Valkyrie stands ready for battle.

A Valkyrie collects the soul of a dead warrior. 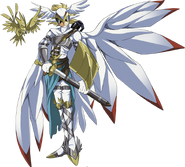 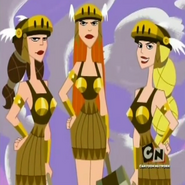 The Hammerettes (The Life and Times of Juniper Lee)

Samirah al-Abbas (Magnus Chase and the Gods of Asgard), demigoddess daughter of Loki and a Valkyrie. 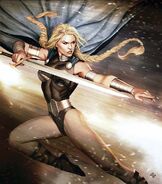 Freyja (Norse Mythology) goddess of war and the Queen of the Valkyries in Fólkvangr.

Silmeria (Valkyrie Profile)
Add a photo to this gallery
Retrieved from "https://powerlisting.fandom.com/wiki/Valkyrie_Physiology?oldid=1685824"
Community content is available under CC-BY-SA unless otherwise noted.