Spider-Man (Marvel Zombies) projects his own veins and arteries to use as makeshift webbing.

"Do you have any idea how complicated your circulatory system is?"
― God (Family Guy)

The power to manipulate the veins and arteries of oneself and/or others. Variation of Body Manipulation.

The user has complete control over the circulatory system of oneself and others, including the veins and arteries

Yhwach (Bleach) extends his own Reishi infused blood vessels outside his body...

While using his Gear Second technique, Monkey D. Luffy (One Piece) stretches his veins and arteries, increasing blood flow throughout his body.

SCP-466 (SCP Foundation) can manipulate its veins and arteries to move around its containment cell and attack humans. 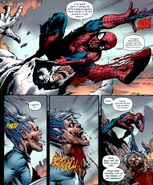 Spider-Man (Marvel Zombies) using his vein webbing to tear Quicksilver's head off.
Add a photo to this gallery
Retrieved from "https://powerlisting.fandom.com/wiki/Vein_Manipulation?oldid=1520688"
Community content is available under CC-BY-SA unless otherwise noted.