The power to have claws with natural venom on/in them. Variation of Venom Secretion. Combination of Poison Generation and Claw Retraction.

The user possesses claws that are coated with or secrete natural venom, which can extend to the victim when said victim is cut by the claws. The poison can have a variety of effects, ranging from sedation, paralysis, and instant death.

The Third Kazekage puppet (Naruto) pulling out a gigantic retractable set of poisonous claws from its right arm sleeve. 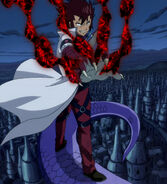