The power to possess fangs with natural venom on/in them. Variation of Venom Secretion. Combination of Poison Generation and Fang Retraction.

The user possesses teeth that are coated with or secrete natural venom, which can extend to the victim when said victim is bitten by the fangs. The poison can have a variety of effects, ranging from sedation, paralysis, mutation and instant death. 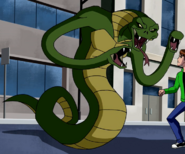 Werewolves (The Vampire Diaries) possess fangs that carry a venom fatally toxic to vampires.
Add a photo to this gallery
Retrieved from "https://powerlisting.fandom.com/wiki/Venomous_Fangs?oldid=1435067"
Community content is available under CC-BY-SA unless otherwise noted.