"The iron sand vibrates, making it sorta like a chainsaw. Fair warning, it might hurt a bit if it touches you!"
― Misaka Mikoto, A Certain Magical Index

The ability to wield or create weapons with vibration-based power. Variation of Power Weaponry. Not to be confused with Vibrokinetic Weaponry.

User can to create or wield weaponry with power over vibrational kinetic energy, which grants the user a wide variety of vibration-based abilities, including several related to sound, and may cross into other realms of kinetic energy to a limited degree. This ability is not only specific to mystic weapons, but also technologically advanced weapons. The power of the weapons depends on what they were created for or what level of vibration-based ability they possess.

Quake (Marvel Comics/Marvel Cinematic Universe) can use her gauntlets to direct or store her vibrational powers for later use, as well as regulate their output to avoid injury. 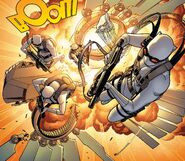 ...and kept using it in his later years as a private military corporation operator.
Add a photo to this gallery
Retrieved from "https://powerlisting.fandom.com/wiki/Vibration_Weaponry?oldid=1335359"
Community content is available under CC-BY-SA unless otherwise noted.