Representation of the Seven Sins of Man

"Open your eyes! You are a vile sinner!"
― Future Zamasu, blaming Future Trunks for his "malicious" actions. (Dragon Ball Super)

"All the sinners around me kill 'till the break of dawn. Never knowing they are controlled, by a one eyed God."
― The Enigma TNG - World of Tragedy

Power to elicit the vices in a person's soul. Sub-power of Sin Manipulation. Variation of Mental Inducement. Opposite to Virtue Inducement.

User can bring out the worst vices and sins in people. Doing so causes the person to completely forget everything around them to perform the Seven Deadly Sins. Usually this results in the victim's death or insanity.

Usually performed by demons on "lesser mortals". More than likely Demons would target people who were well on their way to Hell in the first place.

Envy: People thus affected will act out against others who are perceived to be superior in quality, achievements, or possessions, and will either desire to take such for themselves or will wish that the others lacked the things for which the victim envies them, resulting in that person destroying, torturing or killing the people to whom they feel inferior.

Gluttony: The victim will only eat, feed, and consume relentlessly. Targets tend to gorge themselves to death, eating more than they can take in one sitting, or dying from eating things that are poisonous or inedible.

Greed: Material Greed: Affects the way people will treat their possessions. The afflicted will covet anything "shiny" or perceived as valuable; they will even treat the people around them as possessions. They will covet what they have and take what they want, killing anyone who tries to get in between them and the desired object(s). The affected person will desire everything, money, power, sex, fashion, immortality, friends; all things in existence.

Lust: Drives people to insatiable acts of sexual debauchery. A person will completely forget about their lives for sex, usually dying in the process. Users would cause someone to leave the person they truly love, indulge in sexual activities instead of taking care of themselves or those they are responsible for, or even to commit sex crimes such as rape.

Pride: Targets will act high and mighty as if above everyone and will proceed to "assert" themselves. Usually affects people already in positions of power: presidents, kings, and politicians. These persons will become tyrants and proceed to the lives of those below them a living Hell, taking away rights and killing anyone who dares to oppose them. They are also the type of people that holds grudges for an exceedingly long time, or even indefinitely, especially if another's mistakes are minor.

Sloth: Targets tend to put off everything, laying down and sleeping instead. Will forget everything around them-- including eating and drinking, saving their own lives, going to the bathroom-- all just to lay around and do nothing until they die.

Wrath: Will drive someone into unstoppable murderous rage. Will cause such persons to kill anyone who makes them angriest: a spouse, relative, coworker, even the man who cut such a person off in traffic that morning. Often, with so much rage inside, the victim may suffer a heart attack due to high blood pressure.

Fraud: The victim will be driven to evil, manipulative means of using lies and deceptions for personal gain or to hurt someone else. Those who are made to commit fraud may be seducers, flatterers, thieves, power abusers, hypocrites, evil counselors, simoners, or falsifiers.

Heresy: People who fall under inducement to heresy will be compelled into beliefs that conflict with the dominant group's beliefs. In the eyes of those people in the dominant group, the victim's belief will be deemed blasphemy and to violate their sacred traditions. The target of this vice will possess a sacrilegious instinct to defile anything sacred.

Treachery: The victim will be driven to use any means to betray the trust of another or to forsake moral values for the sake of themselves or for their own beliefs. Someone who considered the victim their idol, who dedicated an entire life to being just like the target out of love, astonishment, or pride, when betrayed might find the trauma too great; it might cause the betrayed to die of a broken heart.

Violence: The target will be filled with a murderous instinct, impelled to hurt someone, themselves, or an entire system or group, with or without cause. The violence toward others is expressed as a brutal intent to kill, whether out of anger or simply for the love of violence. Lethal violence towards oneself will take the form commonly called suicide; the desire to kill oneself may arise out of a sense of failure, or depression. The violence against a system or group may arise from racism, or prejudice. and lead to genocide or destruction of a belief system.

Raven (DC Comics) is the embodiment of the sin of pride. 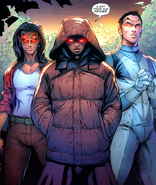 Word Study Avon - "Iniquity"
Add a photo to this gallery
Retrieved from "https://powerlisting.fandom.com/wiki/Vice_Inducement?oldid=1448132"
Community content is available under CC-BY-SA unless otherwise noted.